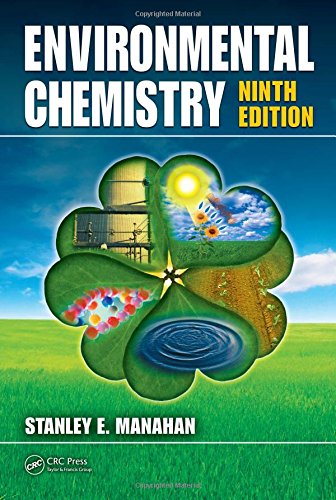 The field of environmental chemistry has evolved significantly since the publication of the first edition of Environmental Chemistry. Throughout the book’s long life, it has chronicled emerging issues such as organochloride pesticides, detergent phosphates, stratospheric ozone depletion, the banning of chlorofluorocarbons, and greenhouse warming. During this time the first Nobel Prize for environmental chemistry was awarded. Written by environmental chemist Stanley Manahan, each edition has reflected the field’s shift of emphasis from pollution and its effects to its current emphasis on sustainability.

What makes this book so enduring? Completely revised, this ninth edition retains the organizational structure that has made past editions so popular with students and professors while updating coverage of principles, tools, and techniques to provide fundamental understanding of environmental chemistry and its applications. It includes end-of chapter questions and problems, and a solutions manual is available upon qualifying course adoptions. Rather than immediately discussing specific environmental problems, Manahan systematically develops the concept of environmental chemistry so that when he covers specific pollutions problems the background necessary to understand the problem has already been developed.

New in the Ninth Edition:

Manahan emphasizes the importance of the anthrosphere – that part of the environment made and operated by humans and their technologies. Acknowledging technology will be used to support humankind on the planet, it is important that the anthrosphere be designed and operated in a manner that is compatible with sustainability and that it interacts constructively with the other environmental spheres. With clear explanations, real-world examples, and updated questions and answers, the book emphases the concepts essential to the practice of environmental science, technology, and chemistry while introducing the newest innovations in the field. Readily adapted for classroom use, a solutions manual is available with qualifying course adoption.

Stanley E. Manahan is professor emeritus of chemistry at the University of Missouri–Columbia, where he has been on the faculty since 1965. He received his AB in chemistry from Emporia State University in 1960 and his PhD in analytical chemistry from the University of Kansas in 1965. Since 1968 his primary research and professional activities have been in environmental chemistry, toxicological chemistry, and waste treatment. His classic textbook, Environmental Chemistry, has been in print continuously in various editions since 1972 and is the longest standing title on this subject in the world. His other books are Fundamentals of Environmental Chemistry, 3rd ed. (Taylor & Francis/CRC Press, 2009), Fundamentals of Sustainable Chemical Science (Taylor & Francis/CRC Press, 2009), Environmental Science and Technology, 2nd ed. (Taylor & Francis, 2006), Green Chemistry and the Ten Commandments of Sustainability, 2nd ed. (ChemChar Research, Inc, 2006), Toxicological Chemistry and Biochemistry, 3rd ed. (CRC Press/Lewis Publishers, 2001), Industrial Ecology: Environmental Chemistry and Hazardous Waste (CRC Press/Lewis Publishers, 1999), Environmental Science and Technology (CRC Press/ Lewis Publishers, 1997), Hazardous Waste Chemistry, Toxicology and Treatment (Lewis Publishers, 1992), Quantitative Chemical Analysis (Brooks/Cole, 1986), and General Applied Chemistry, 2nd ed. (Willard Grant Press, 1982). Dr. Manahan has lectured on the topics of environmental chemistry, toxicological chemistry, waste treatment, and green chemistry throughout the United States as an American Chemical Society Local Section Tour Speaker and has presented plenary lectures on these topics in international meetings in Puerto Rico; the University of the Andes in Merida, Venezuela; Hokkaido University in Japan; the National Autonomous University in Mexico City; France; and Italy. He was the recipient of the Year 2000 Award of the Environmental Chemistry Division of the Italian Chemical Society. His research specialty is gasification of hazardous wastes.