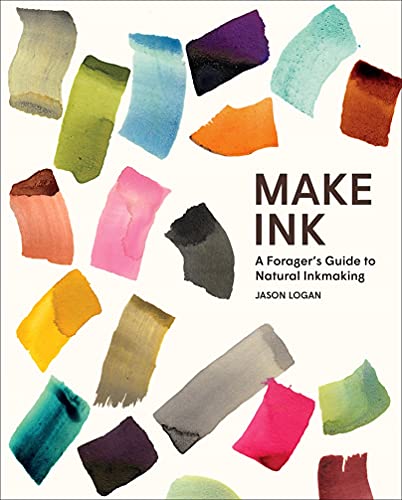 The Toronto Ink Company was founded in 2014 by designer and artist Jason Logan as a citizen science experiment to make eco-friendly, urban ink from street-harvested pigments. In Make Ink, Logan delves into the history of inkmaking and the science of distilling pigment from the natural world. Readers will learn how to forage for materials such as soot, rust, cigarette butts, peach pits, and black walnut, then how to mix, test, and transform these ingredients into rich, vibrant inks that are sensitive to both place and environment. Organized by color, and featuring lovely minimalist photography throughout, Make Ink combines science, art, and craft to instill the basics of ink making and demonstrate the beauty and necessity of engaging with one of mankind s oldest tools of communication.

"Ink's ingredients are usually closely held secrets, but one artist shows how you can make it with items found all across the city, from soggy walnuts to rusty bedsprings." --CityLab

"Make Ink: A Forager's Guide To Natural Inkmaking is the gorgeously colourful new book by designer and artist Jason Logan, delving into the world of ink making and the science behind it. You'll learn how to forage for materials such as soot, rust, peach pits and walnuts and how to mix, test and transform them into your very own rich, vibrant inks." --Your Home

Jason Logan is the founder of the Toronto Ink Company. He is an internationally recognized designer, creative director, author, and artist. His illustrations appear regularly in the New York Times and his fine art has been exhibited in New York, Los Angeles, Toronto, and the Yukon. His work has been recognized by the AIGA, SPD, The Centre for Social Innovation and the Canada Council for the Arts. He is the author of three illustrated books with translations in several languages.

Michael Ondaatje is a celebrated poet, novelist, editor, and filmmaker, best know for his 1970 poetry collection The Collected Works of Billy the Kid, and his 1992 Booker Prize–winning novel The English Patient, which was adapted into an Academy Award–winning film by the same name in 1996.