Items related to The Lacemaker and the Princess

Bradley, Kimberly Brubaker The Lacemaker and the Princess 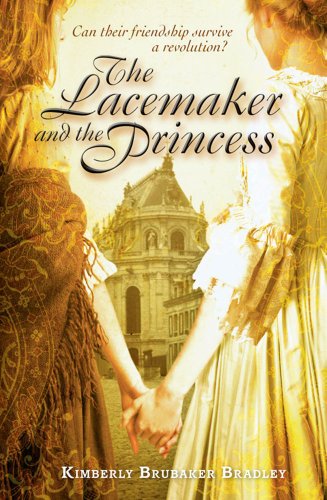 Eleven-year-old Isabelle is a lacemaker in the town of Versailles. After a chance encounter with Queen Marie Antoinette as she makes a delivery to the palace, Isabelle finds herself appointed official companion to the queen's daughter and thrust into a world of luxury. But the year is 1789, and the city is rife with whispers of revolution. There are rumours of starvation in the countryside, and unrest is widespread. Soon Isabelle will have to choose sides. But whose side is she on? Either way, she will have to betray those she cares about most...Set amid the chaos of the French Revolution, this is a vivid portrait of life inside the palace of Versailles, and a touching tale of two friends divided by class.

Kimberly Brubaker Bradley is the author of several historical novels, including For Freedom: The Story of a French Spy, which received starred reviews in Booklist and Kirkus Reviews and was an IRA Teacher's Choice, a VOYA Top Shelf Fiction selection, a New York Public Library Book for the Teen Age, and a Bank Street Best Book. She lives with her husband and two children in Bristol, Tennessee.

Book Description Condition: Very Good. This book is in very good condition and will be shipped within 24 hours of ordering. The cover may have some limited signs of wear but the pages are clean, intact and the spine remains undamaged. This book has clearly been well maintained and looked after thus far. Money back guarantee if you are not satisfied. See all our books here, order more than 1 book and get discounted shipping. . Seller Inventory # 7719-9781416925958

Book Description Paperback. Condition: Used; Good. **SHIPPED FROM UK** We believe you will be completely satisfied with our quick and reliable service. All orders are dispatched as swiftly as possible! Buy with confidence!. Seller Inventory # mon0001632995

Book Description Paperback. Condition: Very Good. The book has been read, but is in excellent condition. Pages are intact and not marred by notes or highlighting. The spine remains undamaged. Seller Inventory # GOR003726639

Book Description Condition: Very Good. Shipped within 24 hours from our UK warehouse. Clean, undamaged book with no damage to pages and minimal wear to the cover. Spine still tight, in very good condition. Remember if you are not happy, you are covered by our 100% money back guarantee. Seller Inventory # 6545-9781416925958