Items related to The Spartacus War 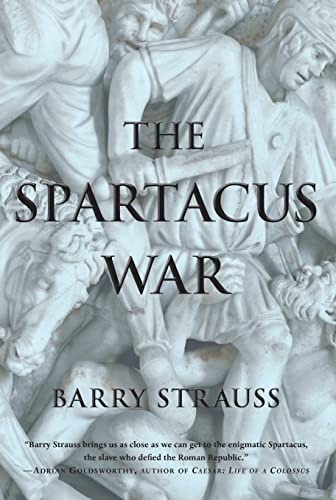 An authoritative account from an expert author: The Spartacus War is the first popular history of the revolt in English. A leading authority on classical military history, Barry Strauss has used recent archaeological discoveries, ancient documents, and on-site investigations to create the most accurate and detailed account of the Spartacus rebellion ever written--and it reads like a first-rate novel.

A thrilling story that has inspired novelists and filmmakers: The real-life Spartacus is even more amazing than his fictional counterparts. A slave from Thrace (modern day Bulgaria), possibly of noble origins, he led a shocking rebellion at a gladiatorial school in Capua in 73 BC. Within two years the ranks of his army, which started with fewer than 100 men, swelled to 60,000; they routed nine Roman armies and for a time controlled all of southern Italy. The Roman general Crassus eventually defeated the slave army and while Spartacus apparently died on the field of battle, his body was never recovered. The legend arose that he escaped and remained undefeated..

"With his trademarks of extensive knowledge, insight, and great storytelling ability, Barry Strauss brings us as close as we can get to the enigmatic Spartacus, the slave who defied the Roman Republic." -- Adrian Goldsworthy, author of Caesar: Life of a Colossus

Book Description Soft cover. Condition: New. 1st Edition. "The Spartacus War (Paperback) The Spartacus War is the extraordinary story of the most famous slave rebellion in the ancient world, the fascinating true story behind a legend that has been the inspiration for novelists, filmmakers, and revolutionaries for 2,000 years. Starting with only seventy-four men, a gladiator named Spartacus incited a rebellion that threatened Rome itself. With his fellow gladiators, Spartacus built an army of 60,000 soldiers and controlled the southern Italian countryside. A charismatic leader, he used religion to win support. An ex-soldier in the Roman army, Spartacus excelled in combat. He defeated nine Roman armies and kept Rome at bay for two years before he was defeated. After his final battle, 6,000 of his followers were captured and crucified along Rome's main southern highway. The Spartacus War is the dramatic and factual account of one of history's great rebellions. Spartacus was beaten by a Roman general, Crassus, who had learned how to defeat an insurgency. But the rebels were partly to blame for their failure. Their army was large and often undisciplined; the many ethnic groups within it frequently quarreled over leadership. No single leader, not even Spartacus, could keep them all in line. And when faced with a choice between escaping to freedom and looting, the rebels chose wealth over liberty, risking an eventual confrontation with Rome's most powerful forces. The result of years of research, The Spartacus War is based not only on written documents but also on archaeological evidence, historical reconstruction, and the author's extensive travels in the Italian countryside that Spartacus once conquered. ISBN: 9781416532064 Condition: Brand New, publisher overstock. Never read. Overstock book may have a small dot or line on the edge of the book. Free shipping with USPS Media Mail.". Seller Inventory # ABE-1616605301039

The Spartacus War (Paperback or Softback)