Items related to Star Trek: The Next Generation: Q&A

DeCandido, Keith R. A. Star Trek: The Next Generation: Q&A

Star Trek: The Next Generation: Q&A 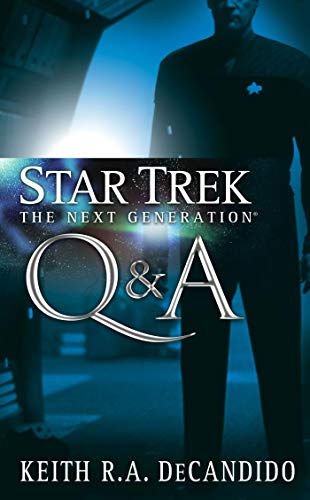 Few of Star Trek's recurring characters have made such an impact as the mercurial, capricious and frequently menacing Q. A seemingly all-powerful being who nevertheless came naked and vulnerable to Captain Jean-Luc Picard for help; cosmic joker, judge and arbiter of the universe; this is an entity to whom humanity apparently means nothing, yet who learns lessons in humility, tolerance and hope from his interactions with Captain Picard and his crew. Now top genre writer Keith R.A. DeCandido conjures him vividly to life as his path and that of the USS Enterprise cross once more, and, in typical Q fashion, he presents Picard and his crew with a deadly challenge to solve the secrets of an enigmatic planet. If they fail, the universe will end...

Keith R.A. DeCandido was born and raised in New York City to a family of librarians. He has written over two dozen novels, as well as short stories, nonfiction, eBooks, and comic books, most of them in various media universes, among them Star Trek, World of Warcraft, Starcraft, Marvel Comics, Buffy the Vampire Slayer, Serenity, Resident Evil, Gene Roddenberry's Andromeda, Farscape, Xena, and Doctor Who. His original novel Dragon Precinct was published in 2004, and he's also edited several anthologies, among them the award-nominated Imaginings and two Star Trek anthologies. Keith is also a musician, having played percussion for the bands the Don't Quit Your Day Job Players, the Boogie Knights, and the Randy Bandits, as well as several solo acts. In what he laughingly calls his spare time, Keith follows the New York Yankees and practices kenshikai karate. He still lives in New York City with his girlfriend and two insane cats.