Items related to A Constellation of Vital Phenomena (Thorndike Press... 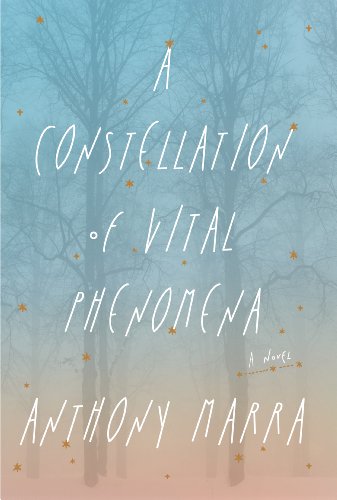 Stegner Fellow, Iowa MFA, and winner of the" Atlantic"'s emerging writer contest, Anthony Marra has written a brilliant debut novel that brings to life an abandoned hospital where a tough-minded doctor decides to harbour a hunted young girl, with powerful consequences.
In the final days of December 2004, in a small rural village in Chechnya, 8-year-old Havaa hides in the woods when her father is abducted by Russian forces. Fearing for her life, she flees with their neighbour Akhmed to the bombed-out hospital, where Sonya, the one remaining doctor, treats a steady stream of wounded rebels and refugees. Over the course of 5 dramatic days, Akhmed and Sonya reach back into their pasts to unravel the intricate mystery of coincidence, betrayal and forgiveness that unexpectedly binds them and decides their fate.
With "The English Patient"'s dramatic sweep and "The Tiger's Wife"'s expert sense of place, Marra gives us a searing debut about the transcendent power of love in wartime, and how it can cause us to become greater than we ever thought possible.

INTERNATIONAL BESTSELLER
#1 Indie Next List Pick
A Barnes & Noble Discover Great New Writers Pick
An O, The Oprah Magazine Debut Novel to Pick Up Now
"Anthony Marra's fine debut novel reaches tenderly, unflinchingly into the centre of Chechen conflict of the late 1990s. This tale has its roots in shocking brutality, and its beauty in the human redemption that can come from unaccountable human kindness. Whimsies of circumstance, fate, and the ties of family and faith serve to guide the reader and the characters through a richly layered and deeply beautiful journey." Vincent Lam, author of "The Headmaster's Wager"
"Powerful, convincing, beautifully realized--it's hard to believe that "A Constellation of Vital Phenomena" is a first novel. Anthony Marra is a writer to watch and savor." T.C. Boyle, "New York Times" bestselling author of "When the Killing's Done" and "The Women"
"It is a book of violence and beauty, and the undisputed arrival of a major new literary talent." "The Globe and Mail"

When everything else seems lost, watch out for the unexpected ties that bind us together...