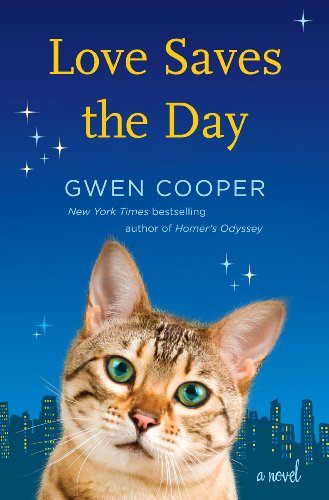 From the author of the "New York Times" bestselling memoir "Homer's Odyssey" comes a tender, joyful, utterly unforgettable novel, primarily told through the eyes of the most observant member of any human family: the cat.
"Humans best understand the truth of things if they come at it indirectly. Like how sometimes the best way to catch a mouse that's right in front of you is to back up before you pounce."
So notes Prudence, the irresistible brown tabby at the center of Gwen Cooper's tender, joyful, utterly unforgettable novel, which is mostly told through the eyes of this curious (and occasionally cranky) feline.
When five-week-old Prudence meets a woman named Sarah in a deserted construction site on Manhattan's Lower East Side, she knows she's found the human she was meant to adopt. For three years their lives are filled with laughter, tuna, catnaps, music, and the unchanging routines Prudence craves. Then one day Sarah doesn't come home. From Prudence's perch on the windowsill she sees Laura, the daughter who hardly ever comes to visit Sarah, arrive with her new husband. They're carrying boxes. Before they even get to the front door, Prudence realizes that her life has changed forever.
Suddenly Prudence finds herself living in a strange apartment with humans she barely knows. It could take years to train them in the feline courtesies and customs (for example, a cat should "always" be fed "before" the humans, and at the same exact time every day) that Sarah understood so well. Prudence clings to the hope that Sarah will come back for her while Laura, a rising young corporate attorney, tries to push away memories of her mother and the tumultuous childhood spent in her mother's dusty downtown record store. But the secret joys, past hurts, and life-changing moments that make every mother-daughter relationship special will come to the surface. With Prudence's help Laura will learn that the past, like a mother's love, never dies.
Poignant, insightful, and laugh-out-loud funny in the ways only a cat can be, "Love Saves the Day "is a story of hope, healing, and how the love of an animal can make all of us better humans. It's the story of a mother and daughter divided by the turmoil of bohemian New York, and the opinionated, irrepressible feline who will become the bridge between them. It's a novel for anyone who's ever lost a loved one, wondered what their cat was "really" thinking, or fallen asleep with a purring feline nestled in their arms. Prudence, a cat like no other, is sure to steal your heart.
Advance praise for "Love Saves the Day"
"Once again, Gwen Cooper shines her light on the territory that defines the human/animal bond. In "Love Saves the Day, " she creates an emotional landscape so beautifully complete that we can't help but share in the heartbreaks and triumphs of her characters, regardless of their species. That, in itself, is a reason to stand up and cheer."--Jackson Galaxy, star of "My Cat From Hell" and author of "Cat Daddy"
"Finally, publishers are realizing cats can write. You go, Prudence!"--"New York Times "bestselling author Sneaky Pie Brown (via her spokeshuman, Rita Mae Brown)

Praise for Gwen Cooper's "New York Times "bestseller, "Homer's Odyssey""
"
"Touching . . . one not to miss."--"USA Today
"
"Cooper is a genial writer with both a sense of humor and a gift for conveying the inner essence of an animal. . . . The indefatigable feline should be an inspiration to us all."--"The Christian Science Monitor"

"What is most touching is how [Homer's] courageous spirit teaches Cooper and readers that there are no limits on love or ability. . . . This lovely human-feline memoir . . . is sure to warm the hearts of all pet lovers."--"Library Journal" (starred review)

"This memoir about adopting a special-needs kitten teaches that sometimes in life, you have to take a blind leap."--"People"

"Once again, Gwen Cooper shines her light on the territory that defines the human/animal bond. In "Love Saves the Day, " she creates an emotional landscape so beautifully complete that we can't help but share in the heartbreaks and triumphs of her characters, regardless of their species. That, in itself, is a reason to stand up and cheer."--Jackson Galaxy, star of "My Cat From Hell" and author of "Cat Daddy"
" "
"Finally, publishers are realizing cats can write. You go, Prudence!"--"New York Times "bestselling author Sneaky Pie Brown (via her spokeshuman, Rita Mae Brown)

""Love Saves the Day" is a charming story of love lost and found, both in human hearts and that of one very special cat. Prudence's voice is as simple and honest as that of the child who sees things adults miss. At its heart, this book is an exploration of unconditional love between mother and daughter, as seen through the eyes of a creature who lives for just this. In that sense, "Love Saves the Day" eloquently explains why so many of us would do anything at all for our pets."--Barbara Delinsky, "New York Times" bestselling author of "Escape"

"Prudence's voice is so hauntingly fragile and raw that it will break your heart a million ways while simultaneously piecing you back together. "Love Saves the Day "is a beautifully told story of loss and love and recovery, and of how the animals in our lives connect us to our own humanity."--Amanda Kyle Williams, author of "Stranger in the Room"

Gwen Cooper is the "New York Times" bestselling author of the memoir "Homer's Odyssey: A Fearless Feline Tale, or How I Learned About Love and Life with a Blind Wonder Cat "and the novel "Diary of a South Beach Party Girl." She is active with numerous animal welfare organizations. Gwen lives in Manhattan with her husband, Laurence. She also lives with her three perfect cats--Homer, Clayton, and Fanny--who aren't impressed with any of it.