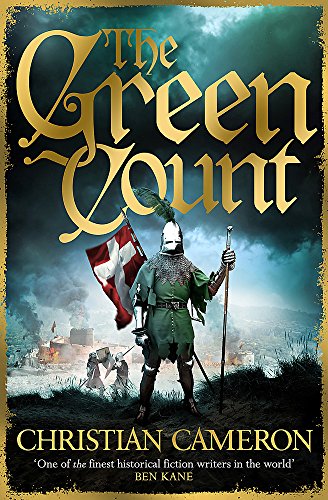 One of the finest historical fiction writers in the world - Ben KaneAfter the bloody trials of Alexandria, Sir William Gold is readying for a pilgrimage to Jerusalem to ease the burden on his soul. He hopes, too, that the Holy City might allow his relationship with Emile, cousin of the Green Count of Savoy, to develop.But the Roman Emperor of Constantinople has been taken hostage by an unknown enemy, and the Green Count is vital to the rescue effort. It is up to Sir William to secure his support, but he soon finds that his past, and his relationship with Emile, might have repercussions he had not foreseen...Suddenly thrust onto the stage of international politics, Sir William finds himself tangled in a web of plots, intrigue and murder., He must hold true to his chivalric principles, and to his knights, if he is to save the Emperor and survive to tell the tale.

Whether you're after a roistering action book, a masterly portrayal of 14th-century European and Asian realpolitik, or to admire a storyteller at the height of his powers, you will enjoy this book (Historical Novels Review on THE GREEN COUNT)

Those who know their historical fiction say Cameron is the one to beat for battle scenes - and they're right. He delivers in every book, especially in his Sir William Gold series, of which this is the third . . . In a world of murder and intrigue, Sir William has it all to do - and you feel like you're there watching him do it (Jon Wise Sunday Sport on THE GREEN COUNT)

Cameron's ability to conjure up what Homer called 'the battle haze' might make the ancient bard proud (Globe and Mail on Tyrant: Funeral Games)

The minutiae of military logistics, the mediations in inter-tribe rivalries, and the casual contemporary scene-setting prove unexpectedly engrossing . . . a sword-slash above the rest of its ilk (Irish Examiner)

The battles . . . are described with enormous verve and power. The ruthless intrigue and politicking that dominate his court are also brilliantly evoked. And, as fate and his own insatiable desire for conquest and glory drive Alexander towards death in Babylon at the age of 32, a genuine sense of an extraordinary personality emerges (Sunday Times on Alexander: God of War)

A sweeping, deeply moving epic that takes the reader into the heart of a different time and culture (Historical Novels Review on Tyrant: Storm of Arrows)

Famagusta, November 1365. The world teeters on the brink of bloody political upheaval . . . and Sir William Gold is caught right in the thick of it.