Items related to The Storms of War (De Witt Family 1) 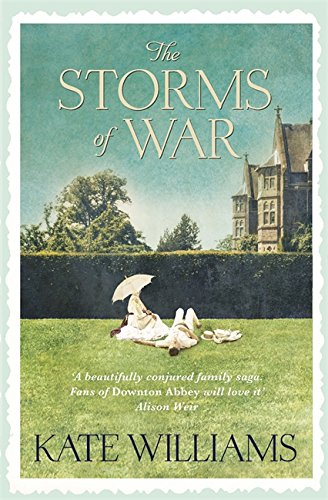 The first novel in Kate Williams' groundbreaking new historical series which begins in the First World War. For fans of BIRDSONG and DOWNTON ABBEY.

In the idyllic early summer of 1914, life is good for the de Witt family. German Rudolf and his aristocratic English wife Verena are planning the wedding of their daughter, Emmeline, while their eldest son Arthur is studying in Paris and Michael is just back from his first term at Cambridge. Celia, the youngest of the de Witt children, is on the brink of adulthood, and secretly dreams of escaping her carefully mapped out future and exploring the world.

But with the onslaught of war, the de Witts find themselves in danger of losing everything they hold dear. As Celia struggles to make sense of the changing world around her, she lies about her age to join the war effort and finds herself embroiled in a complex plot that puts her and those she loves in danger.

With gripping detail and brilliant empathy, Kate Williams tells the story of Celia and her family as they are shunned by a society that previously embraced them, torn apart by sorrow, and buffeted and changed by the storms of war.

a big juicy drama set on the eve of the First World War. TV historian Kate Williams paints a spellbinding portrait of a family clinging on desperately to their privileged way of life (GOOD HOUSEKEEPING)

Brilliant - a passionate and poignant story of a glittering family on the precipice of a vanished world. Spellbinding, gripping and beautiful - a must read . . . the new CAZALET CHRONICLES (Lisa Hilton)

[An] all-encompassing, sweeping epic. It's a book to get immersed in for hours at a time . . . powerful . . . a wonderful achievement (Katherine Webb)

A wonderful evocation of a family torn apart by war, packed with drama and written with a sensitive warmth and fantastic historical insight (Imogen Robertson)

Celia de Witt is the 15 year old daughter of a German born industrialist and his aristocratic wife who live in a magnificent country house; her elder sister is about to have a grand society wedding. What could go wrong? The First World War, that's what ... shades of Downton, with a dash of Atonement (TATLER)

This is the first part in a trilogy set against the the First World War that delves into the complexities of loyalty and survival as life in the de Witt family is ineradicably changed. (WOMAN & HOME)

The new novel by the historian Kate Williams, is an epic story about a young woman whose idyllic world is shattered by the First World War, (SUNDAY TELEGRAPH STELLA Magazine)

Williams is too good a historian for melodramatic sentimentality; trusting the historical detail, the reader can relax into a well-paced, truly affecting narrative . . . Richly detailed, light of foot, Williams tantalises with loose ends and disturbs with shocking shadows (INDEPENDENT)

This terrific saga comes with a fascinating twist ... Williams has a gift for showing how great movements in history affect the lives of people caught up in them (Kate Saunders THE TIMES)

The first novel in Kate Williams' groundbreaking new historical series which begins in the First World War. For fans of BIRDSONG and DOWNTON ABBEY.

1. The Storms of War

2. The Storms of War

4. The Storms of War

5. The Storms of War

7. The Storms of War

8. The Storms of War

9. The Storms of War (Paperback)