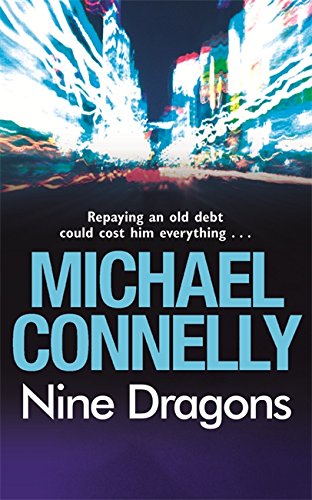 The shooting of a Chinese liquor store owner in LA brings Harry Bosch back to the Rodney King riots and the moment a stranger gave a young cop sanctuary. Now the debt must be repaid, and Harry soon discovers the old man's death was no ordinary hold-up.

Homing in on clues disregarded by the cops on the scene, Harry builds a picture of corruption and intimidation, with the local triads at the heart of it. But as he tries to build a case and breach the impenetrable wall of silence in the local community, he finds he is taking a dragon by the tail - a dragon whose talons reach well beyond LA, and even the States.

Suddenly the most precious thing in Harry's life is under threat, and he will need to leave the familiarity of his home turf, alone and without backup, if he is going to stop his worst nightmare from happening.

If you're an admirer of American crime writing, have you ever stopped to realise just how lucky you are at present? Although the Grim Reaper has recently taken such great names in the field as James Crumley and Donald Westlake, there are (happily) several major talents still at work producing some marvellous work. There is, of course, the holy trinity of James Lee Burke, Elmore Leonard and James Ellroy. But let's not forget Robert Crais. And let’s certainly not forget the subject of this piece, Michael Connelly. Via his remarkable series of novels featuring tough L.A. cop Harry Bosch, Connelly has been quietly delivering one of the most accomplished sequences of crime novels in any country -- achievement enough for any writer, one would have thought. But then Connelly wrote The Lincoln Lawyer, which turned out to be his breakthrough book. This was the novel that introduced low-rent lawyer Mickey Haller -- a man who could hardly be said to have been at the top of his profession, but who has already proved to be a firm reader favourite

Nine Dragons marks the return of Harry Bosch, but this is not quite the character we have encountered in recent books -- because of a particularly personal involvement here, Harry finds himself acting as he did in his immediate post-Vietnam days and behaving like a force of chaos. But the reasons are easy to see. In Los Angeles, a Chinese liquor store owner is killed in what appears to be a shakedown for the triads (the retailer, Mr Li, was under the thumb of a protection racket). Harry Bosch realises that the case is not quite as straightforward as it initially seemed, and finds himself taking on some very dangerous opponents. However, he has an area of vulnerability has not taken into consideration. Harry's estranged wife lives in Hong Kong with her new Chinese lover -- and Harry’s daughter. To his horror, Harry discovers that his daughter has been kidnapped, and takes the first plane to Hong Kong. His problems there are threefold: to save the life of his child as the sands of time run out, to deal with conflict with the local force (and its Asian Gangs Unit) and (perhaps his most difficult challenge) to come to terms with the ways in which he has abdicated from his duties as a father.

Despite the globe-hopping scenario, this is not as complex a Michael Connelly novel as some we have enjoyed recently, but we are in the presence of a writer whose professionalism and skill is never in any doubt. If Nine Dragons is not quite Connelly firing on all cylinders, it’s still streets ahead of most of his competition. --Barry Forshaw