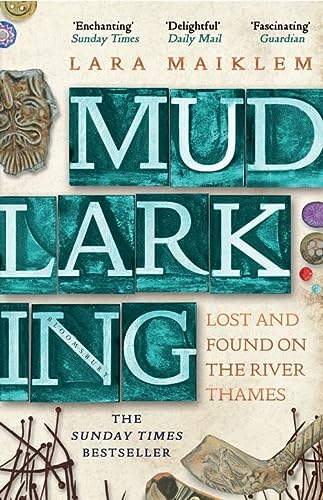 A BBC RADIO 4 BOOK OF THE WEEK

'Driven by curiosity, freighted with mystery and tempered by chance, wonders gleam from every page' Melissa Harrison

'Brilliant. No one has looked at these odd corners since Sherlock Holmes' Sunday Telegraph

'The very best books that deal with the past are love letters to their subject, and the very best of those are about subjects that love their authors in return. Such books are very rare, but this is one' Ian Mortimer

'Fascinating. There is nothing that Maiklem does not know about the history of the river or the thingyness of things' Guardian

'A treasure. One of the best books I've read in years' Tracy Borman

Mudlark (/'mAdla;k/) noun A person who scavenges for usable debris in the mud of a river or harbour

Lara Maiklem has scoured the banks of the Thames for over fifteen years, in pursuit of the objects that the river unearths: from Neolithic flints to Roman hair pins, medieval buckles to Tudor buttons, Georgian clay pipes to Victorian toys. These objects tell her about London and its lost ways of life.

Moving from the river's tidal origins in the west of the city to the point where it meets the sea in the east, Mudlarking is a search for urban solitude and history on the River Thames, which Lara calls the longest archaeological site in England.

As she has discovered, it is often the tiniest objects that tell the greatest stories.

Enchanting. It made even a capsized cynic like me feel more sentimental about the Thames. In fact, I am quite tempted to join Maiklem on the riverbed looking for treasure (Sunday Times)

Mudlarks are river scavengers, but Lara Maiklem is more like a time traveller. Her prose has none of the self-conscious sensibility that defines contemporary nature writing; her thoughtful sentences read as though she were talking to herself. There is a great deal to learn from these pages, not least the insight that finding lost things is the best way of losing yourself. It is, above all, her wisdom that makes Lara Maiklem such restful company (Guardian)

Maiklem persists, in this weirdly engaging book, in seeking out a curious beauty. Maiklem's description of the fog is worthy of Dickens or Joseph Conrad. Maiklem pungently evokes the broken bridges, slippery river stairs, causeways, jetties and boatyards. No one has looked at these odd corners since Sherlock Holmes (Sunday Telegraph)

Maiklem's storytelling shines. Her imagined histories for her special finds read like waterborne fairy stories, a hard kernel of truth clothed in mythical finery. Reading it, I felt like I was down on the foreshore myself, sifting through the pages for titbits (Daily Telegraph)

Lara Maiklem reveals to us the fascinating and poignant micro-world of London's history; the fragments of life deposited on the tidal shores of the Thames. Mudlarking is a flowing river of human stories; beautiful, wondrous and eternal (Hallie Rubenhold)

Maiklem's enthusiasm is infectious, and her reimagining of the lives of those who parted with these items is an illuminated joy (i)

Whoever buys it is blessed. I love the fact that [Maiklem] makes herself the centre of this huge, timeless, endless story that reaches from the distant past and flows past all our consciousnesses out to a place far beyond the reach of the estuary. Lara is such a natural writer; every page just tingles with her imagination. It is a love letter to life itself (Ian Mortimer)

This book is as great a treasure as any of the fascinating and eclectic finds that the author has unearthed along the Thames over the years. The narrative ebbs and flows like the river itself, revealing London's rich history, its modern day landscape and a wealth of poignant personal reflections. One of the best books I've read in years (Tracy Borman)

Maiklem has an infectious love of linking the present with the past. It is historic detail like this that makes Mudlarking much more than just a lengthy list of discarded bric-a-brac. Lara is a romantic, motivated primarily by the human stories behind the objects. Curiosity may kill the cat, but it is the making of many an author. And Lara has it in spades (Daily Mail)

From the London Mudlark comes one of the season's most-anticipated non-fiction titles: a captivating and revelatory history of London and its people, told through objects found along the banks of the River Thames.

Book Description Bloomsbury Publishing PLC, United Kingdom, 2020. Paperback. Condition: New. Language: English. Brand new Book. 'Fascinating. Mudlarks are river scavengers, but Lara Maiklem is more like a time traveller' GuardianMudlark (/'mAdla;k/) noun A person who scavenges for usable debris in the mud of a river or harbourLara Maiklem has scoured the banks of the Thames for nearly twenty years, in pursuit of the objects the river unearths: from Neolithic flints to Roman hairpins, medieval buckles to Tudor buttons, Georgian clay pipes to Victorian toys. What began as a search for solitude came to reveal the story of a city, its people and their lost ways of life.*The No. 2 Sunday Times bestseller and the BBC Radio 4 Book of the Week, now with full colour images*'Enchanting . . . I am quite tempted to join Maiklem on the riverbed looking for treasure' Sunday Times'Reveals to us the fascinating and poignant micro-world of London's history' Hallie Rubenhold, Baillie Gifford Prize-winning author of The Five'No one has looked at these odd corners since Sherlock Holmes' Sunday Telegraph'A quirky and delightful read, wonderfully evocative of London's gloopy, ghost-haunted river' Daily MailWINNER OF THE 2020 INDIE BOOK AWARD FOR NON-FICTION. Seller Inventory # AA79781408889237