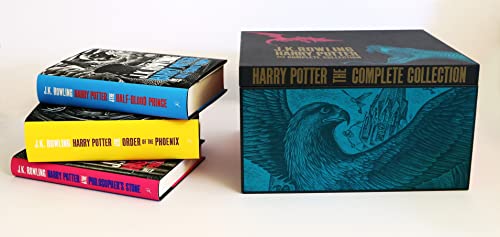 And you thought wizardry was for children. Harry Potter will make you think again. He casts his spells on grown-ups too (James Naughtie)

An incredibly gifted novelist . The fact that Harry attracted adults as well as children has never surprised me. J.K. Rowling has set the standard: it's a high one (Stephen King)

Funny, imaginative, magical . In the 2020s, thirty-something book-lovers will know each other by smug references to Diagon Alley and Quidditch (The Times)

One of the greatest literary adventures of modern times (Sunday Telegraph)

Book Description 2015. Hardcover. Condition: New. Hardcover. J.K. Rowling's spellbinding storytelling continues to captivate readers worldwide. This stunning box set contains all seven of the classic, multi-award-winning Harry Potter no.Shipping may be from our Sydney, NSW warehouse or from our UK or US warehouse, depending on stock availability. 4544 pages. 5.600. Seller Inventory # 9781408868379

Book Description Condition: new. All our books are brand NEW. We ship from differents locations. We use DHL. Seller Inventory # TTIKA00575