Items related to Sweet Caress: The Many Lives of Amory Clay

Boyd, William Sweet Caress: The Many Lives of Amory Clay

Sweet Caress: The Many Lives of Amory Clay 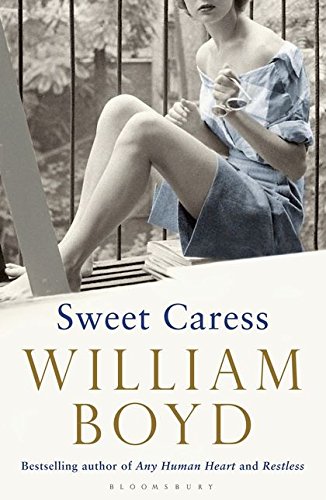 Amory's first memory is of her father doing a handstand. She has memories of him returning on leave during the First World War. But his absences, both actual and emotional, are what she chiefly remembers. It is her photographer uncle Greville who supplies the emotional bond she needs, and, when he gives her a camera and some rudimentary lessons in photography, unleashes a passion that will irrevocably shape her future.

A spell at boarding school ends abruptly and Amory begins an apprenticeship with Greville in London, living in his flat in Kensington, earning two pounds a week photographing socialites for fashionable magazines. But Amory is hungry for more and her search for life, love and artistic expression will take her to the demi monde of Berlin of the late 1920s, to New York of the 1930s, to the Blackshirt riots in London and to France in the Second World War where she becomes one of the first women war photographers. Her desire for experience will lead Amory to further wars, to lovers, husbands and children as she continues to pursue her dreams and battle her demons.

In this enthralling story of a life fully lived, William Boyd has created a sweeping panorama of some of the most defining moments of modern history, told through the camera lens of one unforgettable woman, Amory Clay. It is his greatest achievement to date.

An utterly compelling read . The effect of Amory is that of an interesting woman with a life well-lived, who is not content to sit back and be beautiful as an adored wife or mistress. She grasps every opportunity with both hands, wherever it leads her. Not a bad epitaph, and a tribute to Boyd's skill that we miss her like a friend when we, and she, reach the end (Independent)

Sweet Caress is a rattling good "what will happen next?" story and, on another level, a meditation, in fiction, on women and the lens."Caress" is just the right word for the feel of this novel. Boyd deals with heavy themes with the lightest touch. We're lucky to have him writing for us (John Sutherland The Times)

Boyd is as good as ever at capturing time and place, and at blurring the line between fact and fiction . A highly enjoyable read (Daily Telegraph)

One of Britain's best and best-loved storytellers . A skilfully plotted, cleverly constructed and highly entertaining novel. It's a book crying out for screen adaptation (Sunday Express)

Witty and resourceful, Boyd's heroine immediately appeals . This is the story of a life shaped and scarred by war and also by those accidents of fate over which none of us can exert power (Daily Mail)

William Boyd is a gifted chronicler of lives both enigmatic and artistic . Rich in psychological depth, zingy characters and period detail (Mail on Sunday)

Boyd is a gifted and intelligent story-teller, who possesses the charm to beguile us through a tale which, like all his novels, bears testimony to the damage inflicted on the human psyche by love and war (Amanda Craig Independent on Sunday)

Boyd is a brilliant novelist . Sweet Caress is an audacious, sweeping, rich layer cake of a novel, at once a textual hall of mirrors and a brilliant tale of a life well lived (Elizabeth Day Observer)

Boyd is a gifted storyteller . This is his fourth novel with a female protagonist and depicts every stage of Amory's life - from first kisses and teenage passions through to the pain of infertility - so convincingly that I have to remind myself it's written by a man (Sunday Times Ireland)

Clever and compelling . A thrilling piece of craft, a meditation on work and life and everything in between (Guardian)

1. Sweet Caress: The Many Lives of Amory Clay

Book Description Bloomsbury, 2015. Hardcover. Condition: New. William Boyd's novel tells the life story of Amory Clay, whose career as a photographer starts in 1920s London and Berlin, and takes her to New York in the 1930s, through the Second World War as a war photographer, then on to other wars, lovers, husbands and children. Seller Inventory # 224501

3. Sweet Caress: The Many Lives of Amory Clay