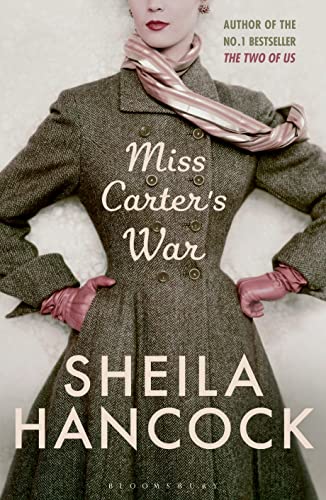 It is 1948 and Britain is struggling to recover from the Second World War. Half French, half English, Marguerite Carter, young and beautiful, has lost her parents and survived a terrifying war, working for the SOE behind enemy lines. Leaving her partisan lover she returns to England to be one of the first women to receive a degree from the University of Cambridge.

Now she pins back her unruly auburn curls, draws a pencil seam up her legs, ties the laces on her sensible black shoes, belts her grey gabardine mac and sets out towards her future as an English teacher in a girls' grammar school. For Miss Carter has a mission - to fight social injustice, to prevent war and to educate her girls.

Through deep friendships and love lost and found, from the peace marches of the fifties and the flowering of the Swinging Sixties, to the rise of Thatcher and the battle for gay rights, to the spectre of a new war, Sheila Hancock has created a powerful, panoramic portrait of Britain through the life of one very singular woman.

There is more than a touch of The Prime of Miss Jean Brodie about the book . Carter is an original and convincing character and Hancock would be perfect for the part in a film of the book (Daily Mail)

A vivid portrait of the fast-changing life in post-war Britain. Nostalgic and moving (Woman & Home)

She has a vocation for putting into words the alienation that age and grief bring. The audience for her previous books will be delighted by this one **** (Daily Telegraph)

A very accomplished tale of a former French resistance heroine who devotes herself to a career as a teacher and social activist. A sweeping story of events of the 20th century, it's well written and rich in historic detail (Sunday Mirror)

A powerful portrait of Britain (Prima)

An immensely enjoyable, passionately written saga that is destined to become a favourite with book clubbers, desperate for nostalgia and a courageous, clever, chic heroine . With honesty and humanity, Hancock, a pacifist, creates a compelling portrait of education in post-war Britain (Herald)

An ambitious novel that combines real events and real people with fictional characters. It's full of heart and is very moving (Woman's Weekly)

A sprawling epic ... Engaging from the start, this is a novel of love, loss, politics, history and most importantly the power of friendship. A rich and absorbing story you won't want to put down **** --(Daily Express)

She is an immensely likeable lady with a wonderful talent to entertain and an ability to write . Funny, touching and brilliantly written --(Daily Mail Books of the Year)

The book is terrific and shining through it is the spirit of Sheila herself: brave, indomitable and full of a desire to change the world --(Daily Express Richard and Judy)

The story of a remarkable woman - the story of our times. A stunning debut novel from iconic actor and bestselling author Sheila Hancock.

Book Description Bloomsbury Publishing, London, U.K., 2014. Soft cover. Condition: New. No Jacket. 1st Edition. Paperback. London, U.K. ***UNCORRECTED PROOF COPY***. Book Condition: New. D/J Condition: None. First Edition, First Printing. 371 pp. Without dedication. Pages Bright and clean, No tears or marks. Numbered Line: 10-1. IN ECXCELLENT CONDITION, PLEASE CONTACT US BEFORE ORDERING THIS BOOK TO CONFIRM BOOK CONDITION AND EDITION (most of our books are 1st editions). We can send you photos of this book with a detailed description. Shipping is normally same day from the UK. "UK BASED SELLER ALL OVERSEAS SHIPPING VIA AIRMAIL. In Stock.- THANKS! We do not stock Ex-Library or Book Club editions. We do not stock ex-library or Book Club editions. We offer a money back guarantee if you are not fully satisfied, please contact us if you have any questions. Bookseller Inventory #O. 121217164462. Seller Inventory # 003589