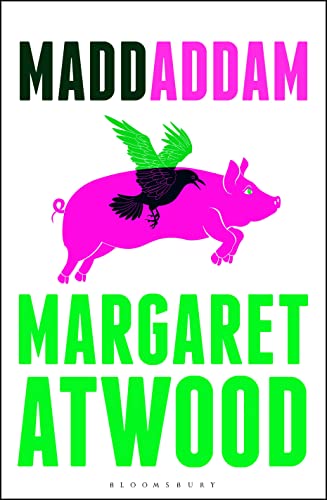 A man-made plague has swept the earth, but a small group survives, along with the green-eyed Crakers - a gentle species bio-engineered to replace humans. Toby, onetime member of the God's Gardeners and expert in mushrooms and bees, is still in love with street-smart Zeb, who has an interesting past. The Crakers' reluctant prophet, Snowman-the-Jimmy, is hallucinating; Amanda is in shock from a Painballer assault; and Ivory Bill yearns for the provocative Swift Fox, who is flirting with Zeb. Meanwhile, giant Pigoons and malevolent Painballers threaten to attack.

Told with wit, dizzying imagination, and dark humour, Booker Prize-winning Margaret Atwood's unpredictable, chilling and hilarious MaddAddam takes us further into a challenging dystopian world - a moving and dramatic conclusion to the internationally celebrated trilogy that began with Oryx and Crake and The Year of the Flood.

Margaret Atwood also has the really fine writer's light-footed ability to keep dancing around her characters...moving, but also very funny ... MaddAddam is an extraordinary achievement (Independent on Sunday)

This final volume deploys its author's trademark cool, omniscient satire, but adds to that a real sense of engagement with a fallen world. Atwood has created something reminiscent to Shakespeare's late comedies; her wit and dark humour combine with a compassionate tenderness towards struggling human beings ... Since almost everything in the world has been broken or has broken down, the novels' form, whirling as brilliantly as the bits of glass in a kaleidoscope, or the pixels in a complex computer game, seems simply to replicate that chaos. However, behind the apparent disorder Atwood the conjuror remains in firm control, juggling her narrative techniques with postmodern glee (Independent)

Sure to be a success (Independent on Sunday)

There are few writers able to create a world so fiercely engaging, so funny, so teeming - ironically - with life. MaddAddam is ultimately a paean to the enduring powers of myth and story, and like the sharpest futuristic visions, it's really all about the here and now (Hephzibah Anderson Daily Mail)

MaddAddam is remarkable for enacting the transition from oral to written history within a fictional universe - one complete with myths and false gods ... MaddAddam is the work of a wild, subversive writer who has looked long and hard at her craft (TLS)

If you want complete escapism this summer, Margaret Atwood fans will not be disappointed with Maddaddam (Woman's Way)

MaddAddam is an extraordinary achievement. Atwood's body of work will last precisely because she has told us about ourselves (Independent on Sunday)

A haunting, restless triumph ... A writer of virtuoso diversity, with an imagination that responds as keenly to scientific concerns as it does to the literary heritage in which she is steeped ... A dystopia over which Atwood sets swirling a glitterball of different kinds of fiction (Sunday Times)

From one of the world's most brilliant and exciting writers - the author of The Handmaid's Tale, Cat's Eye and the Booker Prize-winning The Blind Assassin - comes a new novel of astonishing power; the hugely-anticipated final novel in her dystopian trilogy