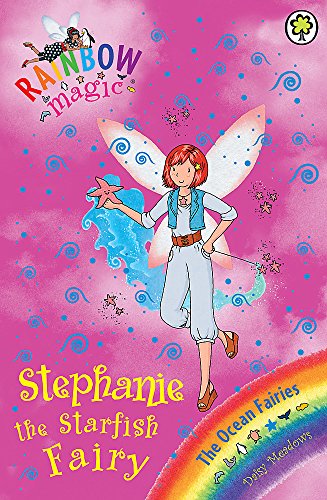 Rachel and Kirsty are visiting Kirsty's grandmother when they are whisked away to Fairyland for the yearly Ocean Gala. Here, Shannon the Ocean Fairy plays her Magical Golden Conch Shell to ensure that the seas and oceans remain peaceful and ordered for the year ahead. Everything is going well - until Jack Frost snatches the conch shell and breaks it into seven pieces. Rachel and Kirsty, along with the Ocean Fairies, must get the pieces back before chaos takes over the oceans!

'These stories are magic; they turn children into readers!' ReadingZone.com

If you like Rainbow Magic, check out Daisy Meadows' other series: Magic Animal Friends and Unicorn Magic!

Daisy Meadows (Author)
The Rainbow Magic and Magic Animal Friends books are written by a small collective of authors under the name Daisy Meadows. Rainbow Magic is the no.1 bestselling series for girls aged 5 and up with over 30 million copies sold worldwide!

Learn more about the books at www.rainbowmagicbooks.co.uk (where you can download the Rainbow Magic Reading Challenge poster) and www.magicanimalfriends.com (where you'll find fun animal activity sheets)

Georgie Ripper (Illustrator)
Georgie Ripper was born in London and is a children's book illustrator known for her work on the Rainbow Magic series of fairy books. She won the Macmillan Prize for Picture Book Illustration in 2000 with My Best Friend Bob and Little Brown Bushrat which she authored and illustrated.