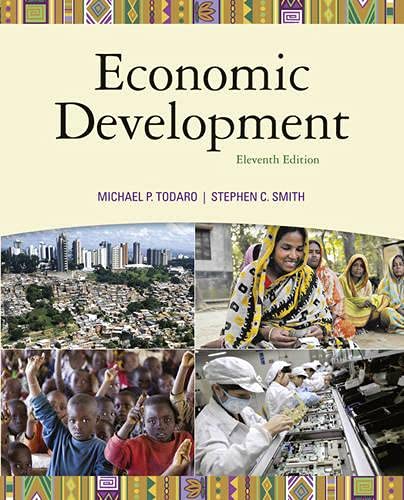 Economic Development is the leading textbook in this field, providing a complete and balanced introduction to the requisite theory, the driving policy issues, and the latest research.

Todaro and Smith take a policy-oriented approach, presenting economic theory in the context of critical policy debates and country-specific case studies so students see how theory relates to the problems and prospects of developing countries.

Economic Development, presents the latest thinking in economic development with the clear and comprehensive approach that has been so well received in previous editions.

‘The pace and scope of economic development continues its rapid, uneven, and sometimes-unexpected evolution. This text explains the unprecedented progress that has been made in the developing world – but fully confronts the enormous problems and challenges that remain to be addressed in the years ahead. The text shows the wide diversity across the developing world, and the differing positions in the global economy held by developing countries. The principles of development economics are key to understanding how we got to where we are, why many development problems are so difficult to solve, and the design of economic development policy and programs as we look ahead’.  [From the preface]

NEW TO THIS EDITION

·        Global crises. A major new section of the text addresses the potential longer-term impacts of the global financial crisis on economic development, examining conditions that caused the crisis, its aftermath, and possible broader implications and potential differences across developing nations and regions.

·        Violent conflict. The new edition provides an entirely new major section on the causes and consequences of violent conflict, post-conflict recovery and development, and prevention of conflict through an improved understanding of its major causes.

“'In attempting the impossible task of covering the empirical diversity of Third World experiences and institutions, trying to keep up with the policy debate, and very important and very difficult, not pushing an ideological line but allowing students to make up their own minds it is streets ahead of all the direct competition I have seen, '

'The strengths of the book are that it is comprehensive, well written and accessible to students who don’t have an in-depth understanding of formal economics.'

“This Book has been and still is a classic.”

Michael P. Todaro was Professor of Economics at New York University for eighteen years and Senior Associate at the Population Council for thirty years. He lived and taught in Africa for six years. He appears in Who's Who in Economics and Economists of the Twentieth Century. He is also the author of eight books and more than fifty professional articles.

In a special February 2011 centenary edition, the American Economic Review selected Todaro’s article “Migration, Unemployment and Development: A 2-Sector Analysis” (with J. Harriss) as one of the twenty most important articles published by that journal during the first hundred years of its existence.

Stephen C. Smith is Professor of Economics and International Affairs at George Washington University. He received his PhD in economics from Cornell University. Smith is author of Ending Global Poverty: A Guide to What Works, co-editor of NGOs and the Millennium Development Goals: Citizen Action to Reduce Poverty, and author or coauthor of some three dozen journal articles