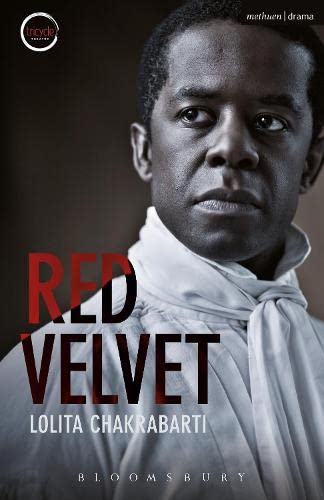 'It's like being at a crossroads - a point of absolute, unequivocal change. It makes the blood rush.'

Olivier-award winning actor Adrian Lester plays Ira Alridge in the world premiere of Lolita Chakrabarti's new play, Red Velvet, which launches Indhu Rubasingham's reign as the Tricycle Theatre's new Artistic Director. The play is set in the Theatre Royal, Covent Garden, in 1833. Edmund Kean, the greatest actor of his generation, has collapsed on stage whilst playing Othello. A young black American actor, Ira Aldridge, has been asked to take over the role. But, as the public riot in the streets, how will the cast, critics and audience react to the revolution taking place in the theatre?

Imagined experiences based on the often-forgotten, but true, story of Ira Aldridge, an African-American actor who, in the nineteenth century, built an incredible reputation on the stages of London and Europe.

The story of Aldridge's painful reception is an interesting subject for this first full-length piece by Lolita Chakrabarti . . . and it's powerfully imagined . . . Chakrabarti smartly draws parallels between the world of Shakespeare's Othello, the 1830s and our own society. She writes shrewdly about the theatre's role as an instrument of both social progress and conservatism . . . an arresting and sometimes very funny play. -- Henry Hitchings * Evening Standard * A striking new play about theatre itself ... The playwright Lolita Chakrabarti brings this fascinating story to vivid life in Red Velvet ... she tells her story with clarity and wit -- Charles Spencer * Telegraph * A play that first playfully, then powerfully, examines progress on the stage as a reflection of the wider world. It's a cracker of a play: gripping, intelligent and passionate ... this is a fine, subtle play that not only depicts the ugliness of prejudice in action, but also touches on wider questions about how change is achieved in theatre and society. -- Sarah Hemming * Financial Times * A thought-provoking piece of social history ... Red Velvet is a fascinating play based on the true story of Ira Aldridge, who in 1833, became the first black actor in a leading role on the London stage -- Janet Street-Porter * Independent on Sunday * A sharp, entertaining play ... it is interesting on the craft of acting, but the personal and racial story is central, skewering certain ignorant terrors not entirely dead today ... Chakrabati poignantly frames the play ... wicked fun is had, too. -- Libby Purves * The Times * [It] puts prejudice - racial and sexual - on trial, but it does so with imaginative flourishes, and extends its inquiry beyond the obviously political ... fresh and sparky. -- Susannah Clapp * Observer * Fiery and funny in equal measure ... Red Velvet is more satirical than angry, full of good-natured theatre folk tying themselves into hysterical knots ... a confident, clever curtain-raiser. -- Andrzej Lukowski * Time Out * Chakrabarti's wonderful new play ... the play's achievement is to animate the themes of racism without descending into preachiness or I-told-you-so sermonising ... it's hilarious to watch. But the play resists the temptation to mock the Victorians without mercy. It's all done with warmth and a sense of proportion. -- Lloyd Evans * Spectator * keenly aware of the ludicrousnesses of life . . . a very funny piece indeed. * Telegraph * the issues Red Velvet raises have never entirely gone away. * Guardian * Lolita Chakrabarti's 'Red Velvet' captures the drama and angst...surrounding Aldridge's groundbreaking performance * Theater Mania * an endlessly fascinating story that everyone should know * Theater Mania * you can experience firsthand what it must have felt like to be part of one seriously rattled London theater audience in 1833 * The New York Times * a last scene that is captivating, and thoroughly devastating * new York Theater * I defy you to attend 'Red Velvet' and not want to know more about Ira Aldridge * New York Theater * A crucial point of change in London's culturally diverse history is played out upon the stage . . . The play will force you to think about the political subtext of theatre and about issues easily translatable to present-day stagecraft and politics. -- Maddi Howell, Books Editor * York Vision *

Lolita Chakrabarti is a British actress and writer who has worked extensively on stage and screen. Her most recent theatre credits include The Great Game, Afghanistan for The Tricycle and John Gabriel Borkman for the Donmar Warehouse. Her screen credits include Vera, Outnumbered, Hustle, Extras and The Bill. Writing credits include The Goddess for Woman's Hour on BBC Radio 4, Faith, Hope and Blue Charity, also on BBC Radio 4 and Last Seen - Joy for Slung Low and the Almeida. In 2012, her Red Velvet was the first play performed under the Tricycle's new artistic director Indhu Rubasingham.