Items related to The Raven Boys 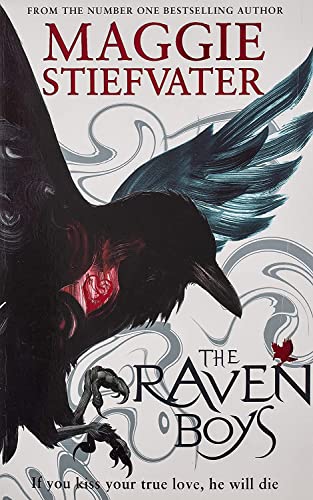 This is the first book in a brand new series from bestselling author, Maggie Stiefvater. Fans of SHIVER (9781407115009), LINGER (9781407121086) and FOREVER (9781407121116) will love this new quartet! Blue has spent the majority of her sixteen years being told that if she kisses her true love, he will die. When Blue meets Gansey's spirit on the corpse road she knows there is only one reason why - either he is her true love or she has killed him. Determined to find out the truth, Blue becomes involved with the Raven Boys, four boys from the local private school (lead by Gansey) who are on a quest to discover Glendower - a lost ancient Welsh King who is buried somewhere along the Virginia ley line. Whoever finds him will be granted a supernatural favour. Never before has Blue felt such magic around her. But is Gansey her true love? She can't imagine a time she would feel like that, and she is adamant not to be the reason for his death. Where will fate lead them?

e "Stiefvater's novel, inspired by Manx, Irish, and Scottish legends of beautiful but deadly fairy horses that emerge from the sea each autumn, begins rivetingly and gets better and better . . . all the way, in fact, to best."
-Horn Book Review, Starred Review

e "Masterful...like nothing else out there now."
-Kirkus Reviews, Starred Review

e "A book with cross-appeal to lovers of fantasy, horse stories, romance, and action-adventure, this seems to have a shot at being a YA blockbuster."
-Booklist, Starred Review

e "Up-On the sea-battered and wind-swept isle of Thisby, fall brings the famed and feared capaill uisce, or water horses, and with them, death . . . The author takes great liberties with the Celtic myth, but the result is marvelous."
-School Library Journal, Starred Review

"Tactile world-building, an island full of compelling characters, and the budding romance between Sean and Puck all make for an unforgettable book that's quite unlike anything else out there."
-NPR Books

"With this beautifully executed drama, Stiefvater has established herself as one of the finest YA novelists writing today."
-Entertainment Weekly

Maggie Stiefvater is the #1 NEW YORK TIMES bestselling author of the novels SHIVER, LINGER, FOREVER, and THE SCORPIO RACES. She is also the author of LAMENT: THE FAERIE QUEEN'S DECEPTION and BALLAD: A GATHERING OF FAERIE. She lives in Virginia with her husband and their two children. You can visit her online at www.maggiestiefvater.com.

Book Description Paperback / softback. Condition: New. New copy - Usually dispatched within 4 working days. This is the first book in a new quarter from the bestselling author of SHIVER. Blue has always been told that if she kisses her true love, he will die. Look out for the next book, THE DREAM THIEVES, out 18th September 2013!. Seller Inventory # B9781407134611

Book Description Paperback. Condition: New. Language: English. Brand new Book. The first electrifying book in Maggie Stiefvater's The Raven Cycle series. "There are only two reasons a non-seer would see a spirit on St. Mark's Eve. Either you're his true love. or you killed him." Part of a clairvoyant family, Blue has spent sixteen years being told that if she kisses her true love, he will die. So when she meets Gansey's spirit on the corpse road, Blue knows that either he is her true love - or she has killed him. The boy emerges from the dark and speaks directly to her. His name is Gansey, and he is a student at Aglionby, a wealthy local private school. With three other mysterious and privileged boys, he is on a quest to find the grave of Glendower - a Welsh king buried somewhere on a Virginia ley line. Whoever finds him will be granted a supernatural favour. Never before has Blue felt such magic around her. But is Gansey really her true love - the one she is destined to kill? Blue never fully believed in the prophecy. But as she is caught up in the strange and sinister world of the Raven Boys, she's not so sure anymore. Absolutely addictive writing for teen girls. and grown-up girls. Magic, mystery and adventure at every turn From the bestselling author of Shiver, Linger and Forever which all debuted at #1 on the UK book bestseller charts Film rights to The Raven Cycle have been acquired. Seller Inventory # AAZ9781407134611