Items related to The Highway Rat 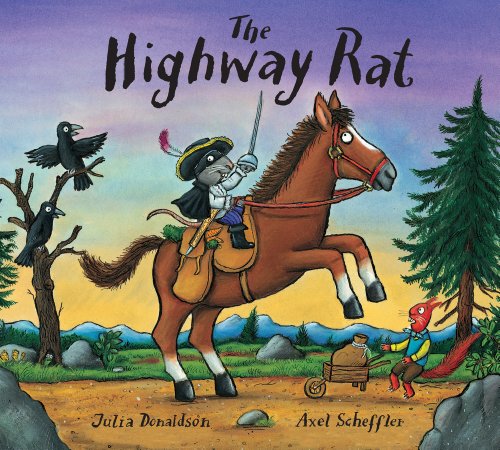 'Give me your buns and your biscuits! Give me your chocolate ?lairs! For I am the Rat of the highway and the Rat Thief never shares!' Life is not safe for the other animals as the villainous Highway Rat gallops along the highway stealing their food. Clover from a rabbit; nuts from a squirrel - he even steals his own horse's hay. Will he finally meet his comeuppance in the form of a cunning duck? A fabulous rollicking rhyme in the style of the famous Alfred Noyes poem 'The Highwayman' from the authors of 'The Gruffalo' and 'Zog'.

"Inspired by Alfred Noyes's "The Highwayman," Donaldson tells the tale of a swashbuckling rat with mask and cape who stops hapless travelers and takes their food at sword point. While he prefers chocolates, puddings, and cakes, he steals clover from a rabbit, nuts from a squirrel, and even hay from his own horse. "The creatures who traveled the highway/grew thinner and thinner and thinner, /While the Highway Rat grew horribly fat/from eating up everyone's dinner." A brave duck in a red kerchief lures the thief to a distant cave, supposedly full of biscuits and buns. While he follows the echoes of his own voice deeper and deeper into the dark, the duck jumps on Rat's horse and takes the stolen food back to her hungry friends. Eventually he emerges on the other side of the hill, becomes a reformed rodent, and finds work sweeping the floor at a cake shop. Scheffler's rich, dark palette creates a brooding atmosphere just right for the Highway Rat's dastardly deeds, and his cartoon-style characters are a wonderful tongue-in-cheek contrast. Humorous details abound, including Gruffalo cookies in the cake shop from this British duo's "The Gruffalo "(Puffin, 2006). This well-paced, rollicking tale is a guaranteed storytime treat." - "School Library Journal "starred review, Mary Jean Smith, formerly at Southside Elementary School, Lebanon, TN Praise for STICK MAN "Scheffler's engaging illustrations, Donaldson's irresistible rhyming text and repeated refrains make this a winning read-aloud that will stick around long after the holiday season." -- Kirkus Reviews, starred review "Donaldson and Scheffler's poignant, suspenseful profile of an inanimate object recalls Laurie Keller or THE VELVETEEN RABBIT. Donaldson's rhymes never skip a beat, and Scheffler personalizes the many animals, people and settings in his witty watercolors. This yarn could become a December perennial." --Publishers Weekly, starred review "Donaldson's rhythm is tight and never b

Julia Donaldson is currently being honored as the UK Children's Laureate, and has written many bestselling picture books and novels for young readers. She lives in Glasgow, Scotland, with her husband, Malcolm. Axel Scheffler's award-winning books include ROOM ON THE BROOM, THE SNAIL AND THE WHALE, and THE GRUFFALO. His illustrations have been published in more than thirty countries. He lives in London, England.