Items related to Froi of the Exiles (The Lumatere Chronicles)

Melina Marchetta Froi of the Exiles (The Lumatere Chronicles)

Froi of the Exiles (The Lumatere Chronicles) 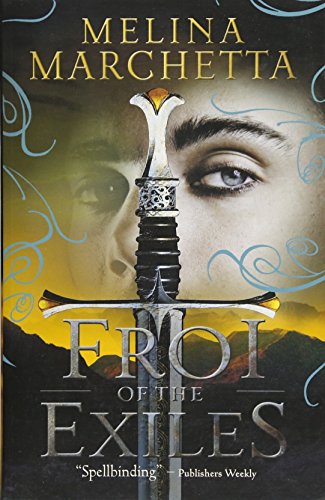 The second in Melina Marchetta's epic fantasy trilogy, set in a menacing kingdom and perfect for Game of Thrones fans.

The second in Melina Marchetta's epic fantasy trilogy, set in a menacing kingdom and perfect for fans of Game of Thrones. The curse on the kingdom of Lumatere has been broken but there is a dark challenge ahead for Froi. Wild as he is, he has finally found somewhere he feels he belongs: by the side of Finnikin and the queen. But Froi must channel his savage side when he is sent on a mission to a rival kingdom, each inhabitant childless for eighteen years. With a frenzied princess roaming the palace, and danger lurking in every corner, Froi needs to discover the truth before it's too late.

A lush tapestry in which each stitch is a nugget of history and each splash of color a rounded character that engages readers' emotions. (starred review) * Booklist * Marchetta again demonstrates her fearlessness in exposing humanity at its ugliest, but also at its noblest, as her damaged characters struggle to rebuild their lives. The precipice on which Marchetta leaves readers will have them aching - but also terrified - to discover what comes next. (starred review) * Publishers Weekly * This book is complex, with rich and flawed characters and a plot that is completely addictive because it's so unpredictable and multilayered. It can stand alone, although plot details from Finnikin of the Rock are mentioned, making it more rewarding to read the two in order. Fans of the intricate fantasies of Megan Whalen Turner or George R. R. Martin will love this powerful book and wait impatiently for the next installment. * School Library Journal * The best audience for this sequel is the many fans of Finnikin of the Rock, who will hungrily devour the book, despite its length... The story's tortured romances and beyond-dysfunctional families are achingly memorable, and the complicated, continually surprising plot will keep readers on their toes... Although readers may throw conniptions over the cliffhanger ending, they will bask in the deep satisfaction of a gripping story gloriously told. * The Horn Book * Here is an author who writes fantasy as well as she writes realism - and in the case of Melina Marchetta, that's high praise, indeed! * Kristin Cashore *

From the bestselling author of Looking for Alibrandi.

1. Froi of the Exiles (The Lumatere Chronicles)

2. Froi of the Exiles (The Lumatere Chronicles)

3. Froi of the Exiles (The Lumatere Chronicles)

4. Froi Of The Exiles