Items related to King of the Sky

Nicola Davies King of the Sky

King of the Sky 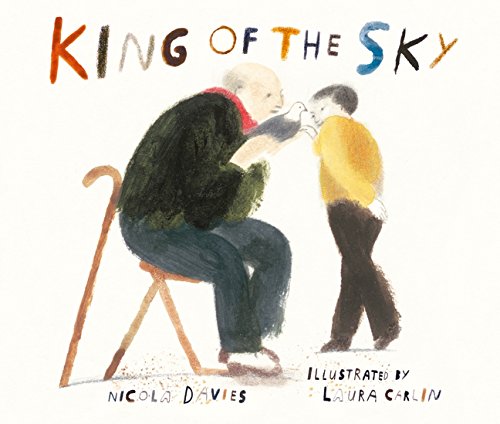 A powerful and beautifully illustrated story about migration and the meaning of home, from the award-winning team behind The Promise.

A breathtaking new picture book by children's author Nicola Davies, illustrated by Laura Carlin, winner of the Bratislava Illustration Biennale and the Bologna Ragazzi Prize for Illustration. Starting a new life in a new country, a young boy feels lost and alone – until he meets an old man who keeps racing pigeons. Together they pin their hopes on a race across Europe and the special bird they believe can win it: King of the Sky. Nicola Davies’ beautiful story – an immigrant’s tale with a powerful resonance in our troubled times – is illustrated by an artist who makes the world anew with every picture. A musical adaptation of King of the Sky has already met with success on the stage, shown two years running at the Hay Festival and due to tour Welsh theatres next spring.

Shortlisted for the Kate Greenaway Medal.

"There's much here to resonate with current world events and it's one of the most visually stunning books of the year. Carlin's artwork is mesmerising, with beautiful use of colour to represent hope and warmth." * The Bookseller * "In a story full of hope against adversity, King of the Sky tells how flying a homing pigeon helps a young boy comes to terms with his life in a strange country far, far from home." * Julia Eccleshare, LoveReading * "Most of the world doesn't have to think twice when asked where they're from or where home is; some children have to think harder about the answer. Davies recognises this - her sensitive, uplifting tale about find your place in a new strange new land could just as well be about a refugee as it could any child moving to a new town." * The Times, Children's Book of the Week * "Nicola Davies tells a poignant tale of friendship and love, of displacement and loss, of hope and home. Powerfully affecting, eloquent and ultimately elevating, her compelling text has, as with The Promise, its perfect illustrator in Laura Carlin. She is as softly spoken as Mr Evans, her pictures beautifully evoking the smoky, mining community setting. The skyscapes of pit-head chimneys, smoke and surrounding hills, and the pigeons in flight have a mesmeric haunting quality. A truly wonderful book that will appeal to all ages." * Red Reading Hub * "A melancholy but uplifting meditation on migration [...] Laura Carlin's blurry, Lowry-esque illustrations capture the sensitive power of Davies's text." * Financial Times * "[...] works well as both a stand-alone story and a starting point for discussing important political issues of migration." * The Irish Times Weekend, a Children's Book of the Month * "[...] a moving picture book [...] It has lyrical text and a satisfyingly happy ending. Laura Carlin's soft-focus illustrations convey flight, solitude, companionship, smog, landscape and memory with an elegiac beauty." * Sunday Telegraph * "Davies' book is a tender, beautiful thing and is, at its core, an immigration story. [...]Davies brings the elderly Mr. Evans to life with her lyrical, tightly-constructed text, using vivid figurative language and deft characterization." * Kirkus * "It is a book filled with foggy skies and dominated by struggle, and yet it spells out the miracle of the homing pigeon's instinct and its metaphorical force." * Observer * "An Editor's Choice in hardback, the story of a young immigrant boy and an old man who races pigeons offers a very humane and timely slant on current world events. Visually stunning; Carlin's use of colour brings great warmth and hope." * The Bookseller *

A powerful and beautifully illustrated story about migration and the meaning of home, from the award-winning team behind The Promise.