Items related to The Name of the Blade, Book One: The Night Itself:...

Zoe Marriott The Name of the Blade, Book One: The Night Itself: 1

The Name of the Blade, Book One: The Night Itself: 1 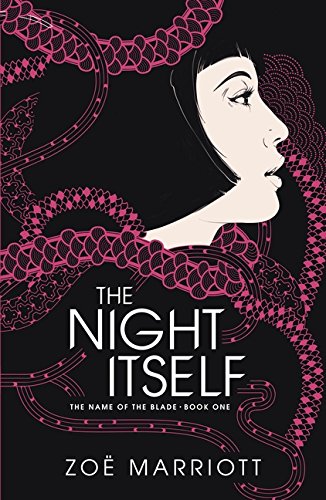 When Mio steals the family's katana – a priceless ancestral sword – from her parents’ attic, she just wants to spice up a fancy-dress costume. But the katana is much more than some dusty antique and her actions unleash a terrible, ancient evil onto the streets of unsuspecting London. Soon Shinobu, a fearless warrior boy, appears to protect Mio – and threatens to steal her heart. With the gods and monsters of Japanese myth stalking her and her friends, Mio realizes that if she cannot keep the sword safe, and learn to control its legendary powers, she will lose not only her own life ... but the love of a lifetime.

Fantasy writer Zoe Marriot explode back onto the scene * Times * It's been a long time since I enjoyed a book this much * The Mountains of Instead * A cracking start to The Name of the Blade trilogy, roll on number 2! * Books4Teens * If you like your trilogies fast and furious, then this is definitely for you * Serendipity Reviews * Clever and cool all at once * Sister Spooky * I just want more of everything * Fluttering Butterflies * I cannot rave about The Night Itself enough * Readaraptor * I just fell for it, hook line and sinker * The Pewter Wolf * My only disappointment is that I've got to wait another year for the next instalment * Feeling Fictional * I can already tell that it will become one of my favourite series, like, ever * Cic Loves Books * I am so looking forward to reading more in this series! I just want more of everything. * Fluttering Butterflies * If you want a book that you can relate to but with a different and fresh perspective that go read this book * Teacher Moloney King * This book is definitely right up there with some of my favourites. * Juniper's Jungle * There was nothing in it I would change, which is wonderful and scary because how is the next book going to live up to that? * Luna's Little Library * I adored The Night Itself * Big Book Little Book * Cool, fast-paced and fun. -- Amanda Craig * The Times * A rising star of fantasy fiction. -- Amanda Craig * The Times * [A] readable and engaging story. . . for fans of Maggie Stiefvater and Cassandra Clare * Booktrust * Marriott has a high level if literary intelligence and is terrific at rebooting fairy-tales with wonderful descriptions of the natural world. -- Amanda Craig * The Times * YA urban fantasy, with as much glittery glamour as action... the use of Japanese legends coming to life in modern London to create the supernatural elements enlivens the plot. * The School Librarian * Fantasy aspects are skilfully woven into a credible urban setting and the romantic element of the novel is mostly subtle but can be quiveringly intense when it needs to be. * Inis * Lived up to every expectation I had. It was gripping, fast paced and had so many twists in it, I never felt bored when reading this * The Pewter Wolf *

Ancient Japanese gods and monsters are unleashed on modern-day London in this epic trilogy from an acclaimed fantasy writer.

1. The Name of the Blade, Book One: The Night Itself