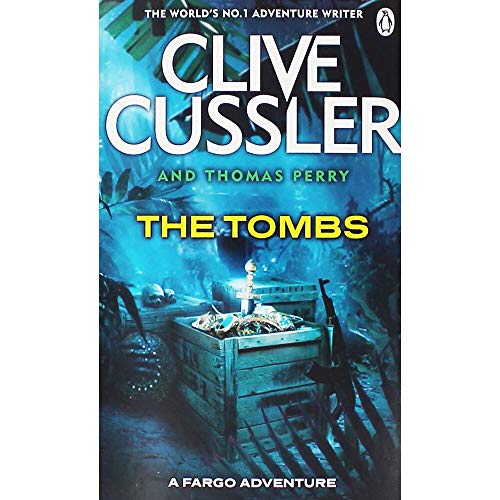 The Tombs is the thrilling fourth Fargo adventure by Clive Cussler. It's a prize beyond imagination. When an archaeologist excavating a top secret historical site realizes the magnitude of his discovery he requests help from treasure hunters Sam and Remi Fargo. And in rushing to join him, the husband and wife team are thrown into their most daring quest to date.The clues point to the hidden tomb of Attila the Hun, the High King who was reportedly buried with a vast fortune of gold and jewels and plunder, a bounty that has never been found. But as Sam and Remi piece together the puzzle, the trail takes them through Hungary, Italy, France, Russia, and Kazakhstan and not to a single tomb, but five. And into the path of deadly danger. They are not the only ones hunting for the High King's riches. The Fargos will find themselves pitted against a thieving group of amateur treasure hunters, a cunning Russian businessman, and a ruthless Hungarian who claims direct descent from Attila himself . . . and will stop at nothing to claim the tombs'riches as his own. Packed with heart-pounding action and boundless invention, The Tombs is an exceptional thriller from the grand master of adventure. The Tombs is the fourth of Clive Cussler's Fargo Adventures, and follows Lost Empire and The Kingdom. This paperback book has 410 pages and measures: 18 x 11 x 2.4cm

Clive Cussler (Author)
Clive Cussler is the author or co-author of a great number of international bestsellers, including the famous Dirk Pitt® adventures, such as Havana Storm; the NUMA® Files adventures, most recently The Pharaoh's Secret; the Oregon Files, such as The Emperor's Revenge; the Isaac Bell historical thrillers, which began with The Chase; and the recent Fargo Adventures which lastly included The Solomon Curse. He lives in Arizona.

Thomas Perry (Author)
Thomas Perry is the author of 23 novels including the Jane Whitefield series, Death Benefits and Pursuit. He has co-written The Tombs and The Mayan Secrets with Clive Cussler. He lives in Southern California.