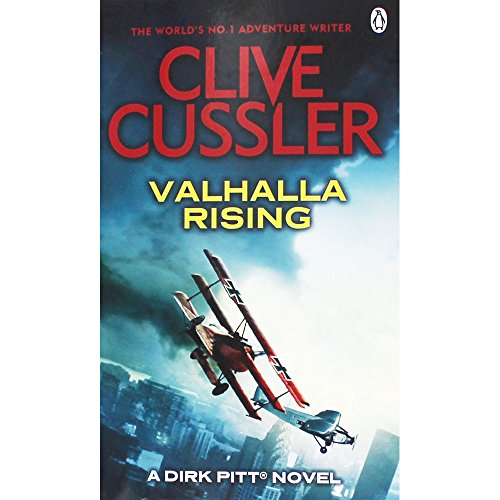 Sabotage, conspiracy and piracy in the air, and below the waves, finds Dirk Pitt plunged into his most dangerous adventure yet. When the luxury cruise lined Emerald Dolphin - powered by a revolutionary new propulsion system - becomes a raging inferno and sinks mysteriously, it is lucky that NUMA special projects director Dirk Pitt is on hand to rescue the passengers and investigate the tragedy. Sifting through the undersea wreckage for signs of foul play, Pitt is unaware of powerful, dark forces player their hand against him. Forced to fight for his life - and those of friends and colleagues - against evermore ruthless enemies from a shadowy organisation, Pitt finds himself caught between the secrets of the past and the intrigues of the future. A future that will hold the world to ransom... Filled with breathtaking suspense and dazzling action, Valhalla Rising sees Clive Cussler at the height of his storytelling powers. Valhalla Rising is the sixteenth of Clive Cussler's bestselling Dirk Pitt novels - the series that also includes Atlantis Found and, his first novel, Mayday - in which our hero finds himself caught up in a web of shipwrecks and dark secrets. This paperback book has 538 pages and measures: 18 x 11 x 3.5cm

Clive Cussler is the author or co-author of a great number of international bestsellers, including the famous Dirk Pitt® adventures, such as Havana Storm; the NUMA® Files adventures, most recently The Pharaoh's Secret; the Oregon Files, such as The Emperor's Revenge; the Isaac Bell historical thrillers, which began with The Chase; and the recent Fargo Adventures which lastly included The Solomon Curse. He lives in Arizona.

Book Description Penguin, 2016. Paperback. Condition: Used; Very Good. Dispatched, from the UK, within 48 hours of ordering. Though second-hand, the book is still in very good shape. Minimal signs of usage may include very minor creasing on the cover or on the spine. Seller Inventory # CHL3446710

Book Description Penguin, 2016. Paperback. Condition: Used; Acceptable. Dispatched, from the UK, within 48 hours of ordering. The book is perfectly readable and fit for use, although it shows signs of previous ownership. The spine is likely creased and the cover scuffed or slightly torn. Textbooks will typically have an amount of underlining and/or highlighting, as well as notes. If this book is over 5 years old, then please expect the pages to be yellowing or to have age spots. Damaged cover. The cover of is slightly damaged for instance a torn or bent corner. Seller Inventory # CHL6307795

Book Description Paperback. Condition: Good. The book has been read but remains in clean condition. All pages are intact and the cover is intact. Some minor wear to the spine. Seller Inventory # GOR008313010

Book Description Paperback. Condition: Very Good. The book has been read, but is in excellent condition. Pages are intact and not marred by notes or highlighting. The spine remains undamaged. Seller Inventory # GOR008320160

Book Description Penguin 07/10/2016, 2016. Condition: Very Good. Shipped within 24 hours from our UK warehouse. Clean, undamaged book with no damage to pages and minimal wear to the cover. Spine still tight, in very good condition. Remember if you are not happy, you are covered by our 100% money back guarantee. Seller Inventory # 6545-9781405931236

Book Description Penguin 07/10/2016, 2016. Condition: Good. Will be shipped promptly from UK warehouse. Book is in good condition with no missing pages, no damage or soiling and tight spine. There may be some dog-eared pages showing previous use but overall a great book. Seller Inventory # 9053-9781405931236

Book Description Penguin 07/10/2016, 2016. Condition: Very Good. This book is in very good condition and will be shipped within 24 hours of ordering. The cover may have some limited signs of wear but the pages are clean, intact and the spine remains undamaged. This book has clearly been well maintained and looked after thus far. Money back guarantee if you are not satisfied. See all our books here, order more than 1 book and get discounted shipping. . Seller Inventory # 7719-9781405931236

Book Description Penguin, 2016. Paperback. Condition: Used; Good. **Simply Brit** Shipped with Premium postal service within 24 hours from the UK with impressive delivery time. We have dispatched from our book depository; items of good condition to over ten million satisfied customers worldwide. We are committed to providing you with reliable and efficient service at all times. Seller Inventory # 2550711

Book Description Penguin, 2016. Paperback. Condition: Used; Good. **SHIPPED FROM UK** We believe you will be completely satisfied with our quick and reliable service. All orders are dispatched as swiftly as possible! Buy with confidence! Aloysius Ihezie. Seller Inventory # 3077909