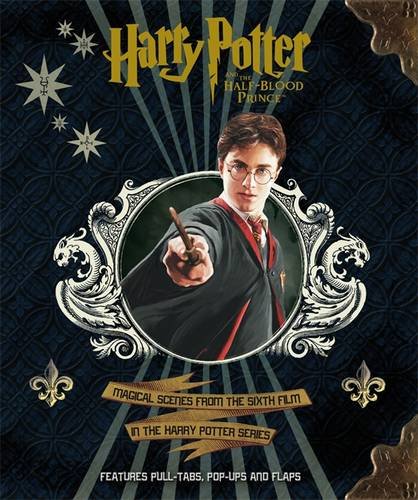 Meet your favourite Harry Potter heroes and villains and relive some of the most memorable and poignant moments from Harry's first six years at Hogwarts, in this beautifully designed pull-tab and lift-the-flap deluxe book.

Harry Potter and the Half-Blood Prince, the sixth book in J.K. Rowling’s bestselling series, picks up shortly after we left Harry at the end of The Order of the Phoenix. Lord Voldemort is acting out in the open, continuing his reign of terror which was temporarily stopped almost 15 years beforehand. Harry is again at the Dursleys, where the events of the previous month continue to weigh on his mind, although not as much as the impending visit from his Headmaster, Albus Dumbledore. Given their last meeting, Harry is understandably confused as to why the old wizard would want to visit him at home.

Rowling opens with a chapter she had wanted to use for the first book, of The Philosopher’s Stone--Lord Voldemort has been creating chaos in the Wizard and Muggle communities alike, the war is in full swing and the Wizarding community now lives in fear. The press have been questioning the events at the Ministry which led to the admission of Voldemort’s return, and of course Harry’s name is mentioned a number of times. Harry’s got his problems, but his anxiety is nothing compared to Hermione’s when the OWL results are delivered. There’s a new Defence Against The Dark Arts teacher, an assortment of new characters and creatures, and startling revelations about past characters and events.

Gone is the rage-filled Harry of The Order of the Phoenix--he’s not being kept in the dark any more, his unjustified Quidditch ban has been lifted and he has matured considerably in his short time out of school. Half-Blood Prince follows Harry into the world of late-teens, and his realisation that nobody is infallible has made his growth that much easier. Accepting his destiny, Harry continues to behave as teenagers do, enjoying his time with his friends, developing his relationships outside of his usual circle, and learning more about how he must, eventually, do what he is destined to do.

J.K. Rowling delivers another fantastic tale which will have the readers gasping for more, capturing the characters perfectly and continuing a tale which readers will enjoy over and over again. --Ziggy Morbi

'The most remarkable publishing sensation for a generation . . . the story is told with such momentum, imagination and irrepressible humour that it can captivate both adults and children' (Sunday Express)

Book Description BBC Childrens Books, 2009. Hardcover. Condition: Good. Connecting readers with great books since 1972. Used books may not include companion materials, some shelf wear, may contain highlighting/notes, may not include cdrom or access codes. Customer service is our top priority!. Seller Inventory # S_291041946

Book Description BBC Childrens Books, 2009. Hardcover. Condition: Good. Connecting readers with great books since 1972. Used books may not include companion materials, some shelf wear, may contain highlighting/notes, may not include cdrom or access codes. Customer service is our top priority!. Seller Inventory # S_294362349

Book Description Hardback. Condition: Very Good. The book has been read, but is in excellent condition. Pages are intact and not marred by notes or highlighting. The spine remains undamaged. Seller Inventory # GOR001167518

Book Description -. Hardcover. Condition: Very Good. Harry Potter: Harry Potter and the Half-Blood Prince: Deluxe Gift Book This book is in very good condition and will be shipped within 24 hours of ordering. The cover may have some limited signs of wear but the pages are clean, intact and the spine remains undamaged. This book has clearly been well maintained and looked after thus far. Money back guarantee if you are not satisfied. See all our books here, order more than 1 book and get discounted shipping. Seller Inventory # 7719-9781405904919