Items related to The Truth Will Out: Unmasking the Real Shakespeare

The Truth Will Out: Unmasking the Real Shakespeare 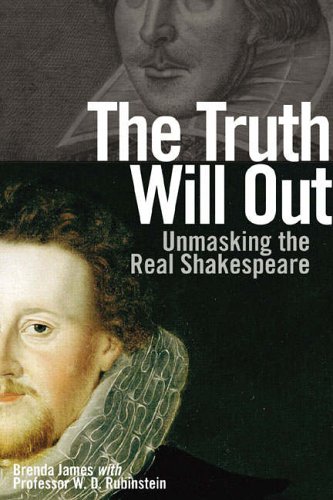 The question of who wrote Shakespeare's plays has been the subject of furious debate among scholars for over the years. This book offers an answer and a plausible candidate, with all the qualities of a believable author.

'A startling and brave book which advances another author for Shakespeare's works - Sir Henry Neville, a well-educated nobleman who spent four years travelling Europe, and thus was familiar with the background of many of the plays.'

William Shakespeare is one of the most elusive and mysterious men in history. Virtually everything known about the facts of his life seems to belie the extraordinary genius of his plays and poems. As a result, over the past century and a half, many intelligent and perceptive people have come to the conclusion that Shakespeare was a front man' or smoke screen' for the true author of the works. Based on five years of in-depth research, Brenda James and William D Rubinstein's book The Truth Will Out unveils the most compelling candidate as the author of the greatest works in English literature. The discovery came as Brenda James was working on trying to discover the identity of the mysterious Mr W H, mentioned in the Dedication to the Sonnets. What emerged from her work amazed her. The code revealed the phrase thy poet and the name of Sir Henry Neville, a now forgotten Elizabethan politician and landowner. Intrigued but needing more information she started to research Neville. One remarkable discovery led to another, most based on previously unknown primary documentary evidence. Finally she was convinced by the shear weight of evidence.

She realised that she had discovered the identity of man who had written the greatest works in English Literature. To confirm her findings she approached Professor William D Rubinstein, an influential figure in the authorship debate and an Associate of The Shakespeare Authorship Trust. At that time he was an agnostic in the debate, unconvinced by any of the known candidates. He was so totally convinced that he agreed to revise and co-author the book, bringing his substantial expertise to the work. Together they believe that Brenda James's truly incredible discovery has, at a stroke, solved comprehensively and categorically all the mysteries and puzzles surrounding the world's greatest literary genius.

1. Truth Will Out: Unmasking the Real Shakespeare

2. TRUTH WILL OUT: UNMASKING THE RE