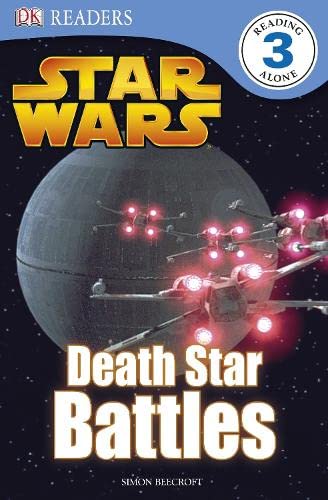 Get your child hooked on reading as they step aboard the Death Star from "Star Wars". Designed to engage even the most reluctant reader, this fun-packed "Star Wars Reader" is all about the indomitable Death Star. Watch as your child discovers more about the Empire's deadliest weapon, finding out what it's capable of and its fatal flaw. Packed with pictures of the Death Star from the "Star Wars" series, it's an out-of-this-world read. And don't forget, there's a galaxy full of DK "Star Wars" books to collect.

Simon Beecroft is the New York Times bestselling author of LEGO Star Wars: The Visual Dictionary as well as many other Star Wars titles for children, including Star Wars The Clone Wars: Watch Out For Jabba the Hutt, Star Wars: Luke Skywalker's Amazing Story, and Star Wars: Beware the Dark Side. He has also written books on subjects as diverse as dinosaurs, extreme weather, future technology, Nelson Mandela, Power Rangers, and the Fantastic Four.

Book Description Dorling Kindersley Publishers Ltd. Paperback. Condition: GOOD. Spine creases, wear to binding and pages from reading. May contain limited notes, underlining or highlighting that does affect the text. Possible ex library copy, will have the markings and stickers associated from the library. Accessories such as CD, codes, toys, may not be included. Seller Inventory # 3293025782

Book Description Paperback. Condition: Very Good. The book has been read, but is in excellent condition. Pages are intact and not marred by notes or highlighting. The spine remains undamaged. Seller Inventory # GOR003653741

Book Description Dorling Kindersley, 2010. Paperback. Condition: Used; Good. **Simply Brit** Shipped with Premium postal service within 24 hours from the UK with impressive delivery time. We have dispatched from our book depository; items of good condition to over ten million satisfied customers worldwide. We are committed to providing you with reliable and efficient service at all times. Seller Inventory # 1758853

Book Description Dorling Kindersley, 2010. Paperback. Condition: Used; Good. **SHIPPED FROM UK** We believe you will be completely satisfied with our quick and reliable service. All orders are dispatched as swiftly as possible! Buy with confidence! Aloysius Ihezie. Seller Inventory # mon0002238975

Book Description Dorling Kindersley Publishers Ltd. Condition: Good. A+ Customer service! Satisfaction Guaranteed! Book is in Used-Good condition. Pages and cover are clean and intact. Used items may not include supplementary materials such as CDs or access codes. May show signs of minor shelf wear and contain limited notes and highlighting. Seller Inventory # 1405350954-2-4