Items related to Eat Yourself Smart: Power up your day with recipes...

Ayers, Charlie Eat Yourself Smart: Power up your day with recipes from the chef who fed Google 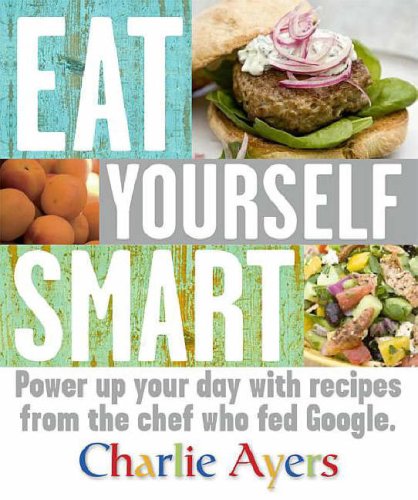 The chef charged with feeding some of the best brains in the world at Google Headquarters, shows you how to cook and eat to power your mind. If you're living in the fast lane and want to eat well, Charlie Ayers, the man who fed Google, has the answers. Google founders, Larry and Sergei took on Charlie in the early years. His brief: to cook food that would fire the Googlers with energy and not leave them slumped over their keyboards after lunch. "Charlie's Cafe" became legendary, and those who ate there were the envy of Silicon Valley. Here, Charlie reveals how he fed Google, and how you too can eat like them. You can learn how to go organic, go raw and go fermented, pick up time-saving tips on what to keep in your store cupboard, fridge and freezer and cook up over 90 fantastic recipes from around the world and "food-on-run" ideas for the working day. Eat to succeed with ideas and recipes from the chef who fed Google.

In 1999, Google took Charlie Ayers on with a brief to feed the Google employees (only 40 at the time) a lunch that would have them back at their computer screens in the afternoon, full of energy and creativity; not slumped over their desks. The Google canteen, known as Charlie’s cafe, quickly became an institution. By the time he left in 2005 he was feeding 1,500. Charlie continues to feed the brains that drive Silicon Valley. He is opening a healthy fast-food restaurant, Calafia, in Palo Alto, home of Stanford University, in 2008, and plans more in the future..