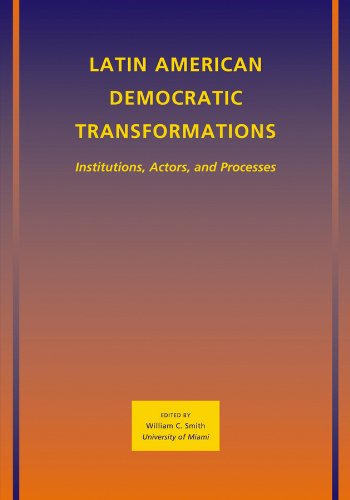 Latin American Democratic Transformations explores the manner in which Latin American societies seek to consolidate and deepen their democracies in adverse domestic and international circumstances. The contributors engage recent debates on liberal and illiberal democracy and probe the complex connections between democratic politics and neoliberal, market-oriented reforms.

William C. Smith received his Ph.D. in political science from Stanford University and currently teaches at the University of Miami. He is the author of Authoritarianism and the Crisis of the Argentine Political Economy (Stanford University Press, 1991) and the editor of numerous volumes on democracy, market-oriented restructuring, and contentious politics in Latin America. His articles have been appeared in numerous journals, including: Studies in Comparative International Development, Revista Mexicana de Sociolog a, Dados, Desarrollo Econ?mico, Political Power and Social Theory, Contexto Internacional, Fuerzas Armadas y Sociedad, Nueva Sociedad, Am rica Latina Hoy, and the Latin American Research Review. Smith is the editor of Latin American Politics and Society.