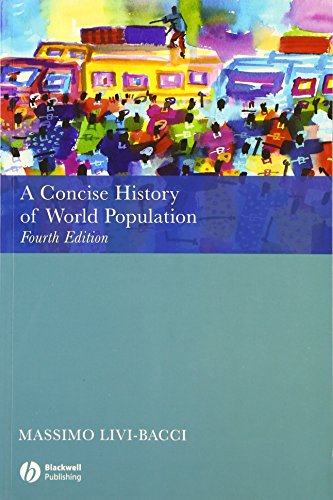 "This is one of the best recent texts on population changes: it deserves the widest readership." TEGNews


"Professor Livi–Bacci is a veritable expert at being able to impart his knowledge to the student community. A Concise History of World Population is noted for its clarity and depth, as Livi–Bacci transfers complicated ideas to the page in cogent and well–defined terms, speaking to his readers in a style that inspires deeper introspection of a subject that will affect them long after they have left the classroom. Recommended a primary text in all courses that study population patterns."
The Electric Review

"An important book for people who are interested in demography and history, and can be used as a valuable reference."
Journal of Population Research

Since its original publication in 1992, this book has become the standard history of world population. It examines the changing patterns of its growth, and the effects of migrations, wars, disease, technology, and culture. Its underlying purpose is to explain the links between nature, culture, and population and thereby to look at ways of preventing future environmental collapse and human catastrophe. It is valued for its informative and accessible style, the reasoned treatment of issues crucial to the future of every species, and the contemporary recasting of theory.

For this fourth edition, the author updates information on current trends in developing countries and incorporates new United Nation projections to 2050. He also provides the latest data on fertility and infant mortality. There is a new section on migration, an emerging issue for rich and poor countries alike. The discussion of America is completely rewritten to give a fuller view of the past, including reference to the slave trade, and coverage of China has been expanded. The bibliography is also updated.