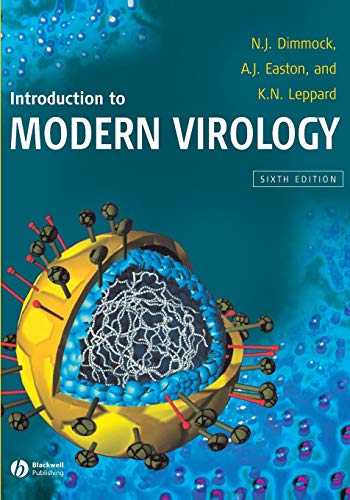 Introduction to Modern Virology has been an established student text for over 25 years. Providing an integrated account of the subject across different host systems, with an emphasis on human and animal viruses, this book covers the field of virology from molecular biology to disease processes using a unique systems approach. Featuring an all new art program in full color, the new edition has been updated throughout, and reorganized into thematic sections on the fundamental nature of viruses, their growth in cells, their interactions with the host organism and their role as agents of human disease. There is a new chapter on Human Viral Disease and rapidly developing areas, such as the use of viruses as gene therapy vectors, have been included.

The 6th edition is even more accessible, now including key points and integrative questions in every chapter, as well as text boxes emphasizing take–home messages, evidence underpinning the main concepts, and further information for more advanced readers. Prevention and therapy, evolution and emerging viruses receive particular attention and specific chapters address the major infectious challenges posed by HIV, pandemic influenza and BSE. This highly accessible text provides ideal reading for all undergraduate and postgraduate students of biology and medicine wishing to study virology.

Artwork from the book and helpful student and instructor resources are available online at www.blackwellpublishing.com/dimmock.

An Instructor manual CD–ROM for this title is available. Please contact our Higher Education team at HigherEducation@wiley.com for more information.

"Dimmock and Primrose occupies a justified niche ... and certainly provides an easy access to virology for the undergraduate or beginning postgraduate ... That this is the fourth edition must attest to the popularity of the authors′ approach over the 20 years since the first edition was published." (Trends in Microbiology, 1995 on the fourth edition)

The eminent readability of the text, coupled with the useful provision of references to the recent literature, should encourage the reader to investigate further and thereby gain a fuller picture of the present and future directions of virology." (Society for General Microbiology Quarterly, 1995, on the fourth edition)

Nigel Dimmock is an internationally acclaimed virologist who has spent the major part of his career at the University of Warwick s Department of Biological Sciences, where he is currently an emeritus professor. His main research interests are influenza viruses, HIV, and antiviral immunology.


Andrew Easton is professor of virology at the University of Warwick. Having spent two years working in the pharmaceutical industry he joined the department at Warwick in 1983 and became Head of the Virology Group in 1998. Easton s research focuses on the molecular biology of pneumoviruses.

Keith Leppard is a reader at the University of Warwick. His research focuses on the interactions of adenovirus with the host cell, in particular the effects of adenoviral proteins on functions of the cell nucleus, and on the development of adenovirus as a gene delivery vehicle.