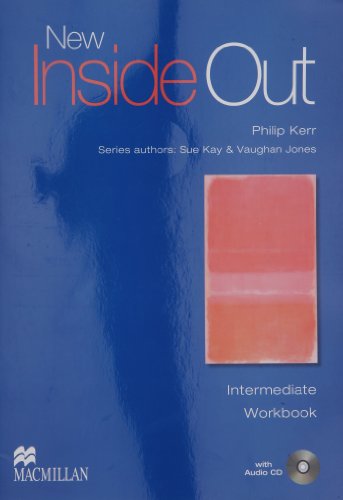 The Workbook Pack provides further practice of all the main points in the Student's Book, plus extra listening practice, pronunciation work and a comprehensive writing course. Also included are short stories that help to recycle the language previously learnt. The accompanying Audio CD provides all the listening material for the activities.

Written by: Philip Kerr has worked as a teacher, teacher trainer, lecturer, educational manager and writer of educational materials. He has lived and worked in the UK, Morocco, Spain and Belgium, and he has presented at conferences and run teacher training courses in more than 25 countries around the world. He currently lives in Brussels. His publications include the coursebook series Straightforward, Inside out and Matura Masters. Series Edited by: Sue Kay studied at Birmingham University, unaware that it would later be the home of the prestigious Bank of English and one of the first places to carry out corpus-based research into the English language. Sue's subject was French, and when she graduated, she didn't go straight into teaching. Sue did a post-graduate course at the Oxford College of F.E. and became a bilingual secretary on the Cote d'Azur in France. Sue married in Vallauris, within sight of Picasso's 'Man and Goat' statue, and her son William was born there too, giving him the double advantage of having a very glamorous place of birth (Cannes) and growing up bilingual. Sue moved to Lyon where she started teaching English after the customary four-week TEFL course at IH in London. She loved Lyon and worked alongside people who went on to set up one of the most impressive and innovative schools she knew - English International. After meeting fellow co-author Vaughan Jones, they began writing the Inside Out series together. Vaughan Jones has been involved in TEFL in one way or another for all of his working life. He stumbled into it early on in Grenoble, France where he had gone straight after university to seek glory on the rugby field. Sadly, in the early eighties, rugby was still very much an amateur sport so Vaughan needed a job to pay for the beer. Through various rugby contacts he got a teaching post at the local Chambre de Commerce and spent two very stimulating years relearning his native tongue through the eyes of his French students. After many different experiences of learning English, teaching English and also being a Sales Rep for Heinemann, which allowed Vaughan to travel far and wide, he decided to move back to England as he had recently just had a new-born child. Settling in a new role, for Heinemann, at the HQ in Oxford Vaughan became frustrated and bored with this role and wanted to try his hand in writing. Since then, he has returned back to teaching and co-authored Inside Out with Sue Kay.

1. Inside Out Intermediate Workbook Pack without Key New Edition

3. Inside Out Intermediate Workbook Pack Without Key New Edition

5. Inside Out Intermediate Workbook Pack without Key New Edition