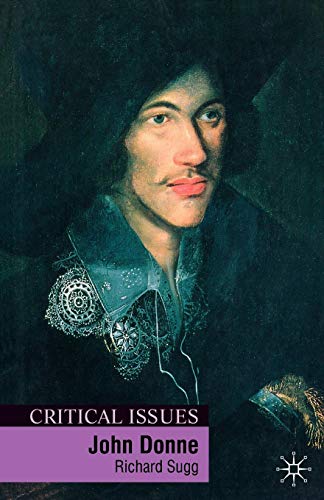 This book offers both a critical introduction to the work of John Donne and a valuable contribution to the study of one of the most popular and enduring English Renaissance writers. Richard Sugg provides students with a coherent overview of Donne's work, life and times, while engaging with the current state of critical and theoretical debate. This approachable book aims to engage students with the distinctive questions surrounding both John Donne's work and the Renaissance world in general.

...his chapters on self, men and women, belief and sin, the new philosophy, new world, and 'Glorious Annihilation' are precisely what is needed in this kind of book, and his prose is consistently nimble, intelligent, and for a Donne scholar, appropriately dramatistic...Sugg has produced a first-rate guidebook for anyone ranging from advanced undergraduates to beginning scholars.' - Catherine Gimelli Martin, Studies in English Literature

John Donne is now a strong candidate for the most popular Renaissance writer after Shakespeare. What lies behind this longstanding and increasing popularity? Paying tribute to the living vitality of Donne's literary voice, and the kaleidoscope of social detail embedded in his writings, Richard Sugg offers a vibrant engagement with the author's work, life and times. He argues that Donne's fiercely original mind produced remarkable and challenging new images of selfhood, love, friendship, and of a natural world marked by the unstable movement from religion to early science. As this suggests, much of Donne's continuing appeal derives from his ability to look forward to recognisably modern attitudes.

At the same time, though, to fully appreciate Donne's life and writing it is necessary to comprehend the strangeness of his social and intellectual world: the peculiar mixture of splendour, violence and suffering which spilled across his path in the streets, theatres and churches of seventeenth-century London, and the attitudes and ideologies expressed within them. Richard Sugg carefully places Donne's poetry and prose in their religious and cultural context, thereby helping the reader to gain a fuller and subtler understanding of his work. He also provides a detailed overview of the current state of critical and theoretical debate.

Approachable and lucid, this is a valuable introduction to one of the most enduring and widely-studied Renaissance authors. It is essential reading for anyone who wishes to engage with the distinctive questions surrounding both John Donne's writings and the Renaissance world in general.

Book Description Palgrave, 2007. Paperback. Condition: Used; Good. **SHIPPED FROM UK** We believe you will be completely satisfied with our quick and reliable service. All orders are dispatched as swiftly as possible! Buy with confidence! Aloysius Ihezie. Seller Inventory # 3345068