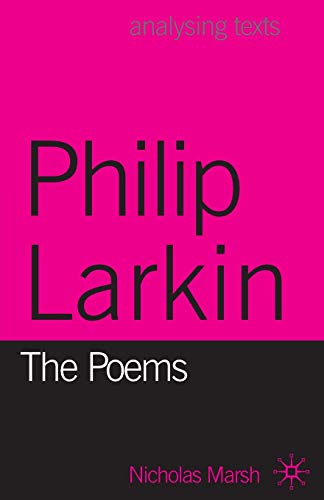 Philip Larkin's poems brought him fame: he became an English institution in his own lifetime. However, since his death in 1985, and the subsequent publication of his letters, controversy has raged around his character and life.

Part I of this essential introduction to Larkin's work:
- takes a fresh look at the poems
- leads the reader into close analysis of many of Larkin's masterful lyrics, demonstrating how to approach these enigmatic works
- features chapters on the variety of voices in the poems, on social dilemmas and rituals, Larkin's depiction of society, and the poet's role
- builds familiarity with Larkin's technique and the major concerns around which his poetry revolves
- contains suggestions for further study at the end of each chapter.

Part II provides the key background information students of Larkin need, including:
- an account of the poet's life
- discussion of his place in a cultural context, stretching from Modernism, through the postwar 'Movement' years and into the 1980s
- historical background, from the rise of fascism in the 1930s to the height of the Cold War
- a sample of major critical views of Larkin's work
- suggestions for further reading.

Providing students with the critical and analytical skills with which to approach the poems, this stimulating book helps readers to enjoy and explore Larkin's work, and to develop their own opinions with confidence.

'The patient, detailed explication of individual poems and the careful concern for their stylistic qualities make this an ideal introduction to Philip Larkin's work.' - Stephen Regan, Durham University, UK

Philip Larkin became an English institution in his own lifetime. However since his death in 1985, controversy has raged around his character and life. This book takes a fresh look at the poems, leading the reader through close analysis, discussion of Larkin's major concerns and demonstrating how to approach these enigmatic works. It also provides all the background information a student of Larkin needs, including an account of his life, discussion of cultural context and major critical views.