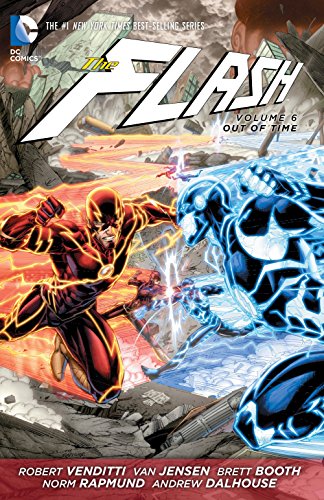 The start of a new era for the Fastest Man Alive! In the future, The Flash is a broken man. His powers have failed him time and again at great cost to him and the city he has sworn to protect. Now he's coming back to the current time to stop the one event that destroyed his life. Meanwhile, in the present, Barry Allen must contend with thieves trying to capitalize on the devastation of FOREVER EVIL. It's a tale of two timelines that ushers in one of The New 52's most anticipated character debuts! THE FLASH VOL. 6 begins a brand new era for the Scarlet Speedster, from writer Robert Venditti (GREEN LANTERN), Van Jensen (GREEN LANTERN CORPS) and artist Brett Booth (NIGHTWING, TEEN TITANS). Collects THE FLASH #30-34 and THE FLASH ANNUAL #3.

Van Jensen and Brett Booth turn expectations on their head and instead of launching into a new chapter of Barry Allen s story with sound and fury, they reaffirm Barry s humanity and in the process set up a very exciting era for the Scarlet Speedster. NEWSARAMA
The electric blue Flash with its crackling energy just blazes across the page. COMIC BOOK RESOURCES" --COMIC BOOK RESOURCES

New York Times best-selling author Robert Venditti broke into comics the old fashioned way- by starting out in the mailroom. He began working for publisher Top Shelf Productions in 2002, and within a few months sold them the script for The Surrogates, his first comic book series. The story was later adapted into a feature film starring Bruce Willis and Ving Rhames. Venditti went on to write the original graphic novel The Homeland Directive, as well as the graphic novel adaptations of Rick Riordan's bestselling Percy Jackson and the Olympians novels. In 2012, he helped relaunch Valiant Entertainment's comic book universe by writing their flagship title, X-O Manowar. Venditti currently writes GREEN LANTERN and THE FLASH for DC Comics. He lives in Atlanta, Georgia. Van Jensen is a former newspaper crime reporter and magazine editor who broke into comics as the writer of Pinocchio, Vampire Slayer, which was named one of YALSA's Top Ten Great Graphic Novels for Teens. He also has written The Leg: The Remarkable Reappearance of Santa Anna's Disembodied Limb, and GREEN LANTERN CORPS and THE FLASH for DC Comics. A native of western Nebraska, Jensen now lives in Atlanta.