Items related to Batman and Son 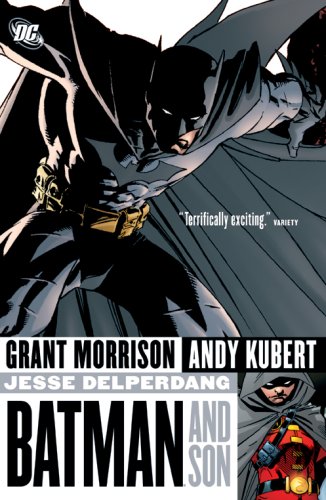 Comic legends Grant Morrison (ALL STAR SUPERMAN, SEVEN SOLDIERS) and Andy Kubert (Ultimate X-Men, 1602) join forces to bring you an unforgettable tale of the Dark Knight. After Batman faces down an army of winged horrors in a no-holds barred, bone-crunching superbrawl among the treasures of London's Pop Art Museum, Batman receives the greatest shock of his life when he discovers that he has a son. Sparks fly when the new addition to the Bat-family is introduced to Batman's adopted son, Robin, the Boy Wonder. Which one will be chosen to carry on the legacy as Gotham's protector

Grant Morrison is one of comics' greatest innovators. His long list of credits includes Batman: Arkham Asylum, JLA, Seven Soldiers, Animal Man, Doom Patrol, The Invisibles and The Filth. He is currently writing Batman and All-Star Superman. Andy Kubert, son of comics master Joe Kubert, has long been one of comics' greatest young talents, with work including both X-Men and Ultimate X-Men, Adam Strange, Captain America, 1602 and much more!