Items related to Dark Age Ahead 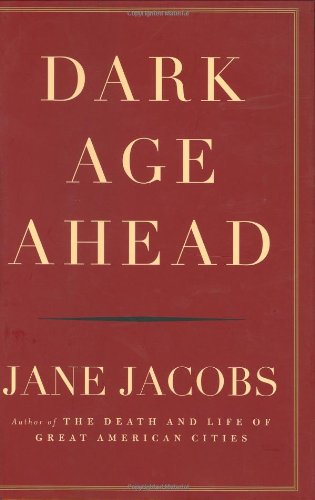 A dark age is a culture's dead end. In North America, for example, we live in a virtual graveyard of lost and destroyed aboriginal cultures. In this book, author Jane Jacobs argues that we face the coming of our own dark age.

"She once again has proven herself to be one of the most trenchant observers and challenging critics of American culture and character." --The Christian Science Monitor

"There's no writer more lucid than Jane Jacobs, nobody better at using wide-open eyes and clean courtly prose to decipher the changing world around us. . . . It's a tribute to Jacobs that her observations still resonate, succinct yet dead on. That's why Dark Age Ahead is a treat to read for the way it snaps our perceptions into focus." --San Francisco Chronicle "A short, dense, terse and often lyrical book that sets the wistful against the hopeful. . . . Wonderful and essential." --Milwaukee Journal Sentinel "Dark Age Ahead is witty and damning. . . . It's hard to disagree with Jane Jacobs. . . . Worth reading and thinking about." --The Washington Post Book World "Jane Jacobs has been right about so much for so long that when she writes gloomily of a 'Dark Age Ahead, ' we all better listen.... Prescient." --Austin-American Statesman "[Jacobs is] the matchless analyst of all things urban." --The New Yorker "A short, terse and often lyrical book that sets the wistful against the hopeful. . . . This book is a warning, artfully and profoundly dressed as a reminder. . . . Thanks to Jacobs for pointing the way." --St. Petersburg Times "Scholarly yet accessible . . . certain to spark debate . . . [a] unique addition to the genre of social forecasting." --Library Journal "Compact and compelling...A spellbinding account of the forgetting and misplacing of shared values, assets and skills that . . . may lead the contemporary Western world into widespread social, economic and physical disaster." --Toronto Globe and Mail "Still right and still cranky after all these years." --Cincinnati Enquirer "Jacobs has always championed neighborhoods. Now she has extended her ideas about community to include the culture at large...We should stick around and listen up." --Newsweek "Jacobs is the quintessential public intellectual, entirely self-taught, omnivorous in her references, pan-historical in her outlook. . . . Dark Age Ahead is something of a retrospective of Jacobs' theories and travels, anchored in specific examples from her years of observation and activism." --The Sunday Oregonian (Portland) "Culture critic Jane Jacobs, famous for her work on the economies of cities, has taken the idea of a tipping point toward a dramatic end." --Chicago Tribune "A sweeping survey of a civilization--ours--on the brink of catastrophe. . . . What makes Dark Age Ahead worth a read is the way in which its author brings her famously independent and inductive mind to bear in fresh ways on familiar topics." --Berkeley Daily Planet "A blend of advocacy and anecdote about how to protect the vitality of American cities." --The Financial Times "Jane Jacobs is the kind of writer who produces in her readers such changed ways of looking at the world that she becomes an oracle, or final authority." --The New York Sun About the Author:

JANE JACOBS is the legendary author of The Death and Life of Great American Cities, a work that has never gone out of print and that has transformed the disciplines of urban planning and city architecture. Her other major works include The Economy of Cities, Systems of Survival and The Nature of Economies. She lives in Toronto.