Items related to With Her in Ourland

Gilman, Charlotte Perkins With Her in Ourland 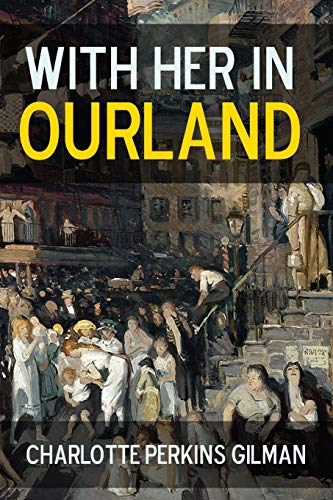 1916 Dystopian Science Fiction The three of us, all with set faces of high determination, sat close in the big biplane as we said goodbye to Herland and rose whirring from the level rock on that sheer edge. We went up first, and made a wide circuit, that my wife Ellador might have a view of her own beloved land to remember. How green and fair and flower-brightened it lay below us! . . . Our long visit, the kind care, and judicious education given us, even though under restraint, and our months of freedom and travel among them, made it seem to me like leaving a second home. The beauty of the place was borne in upon me anew as I looked down on it. . . Terry looked at it with set teeth. He was embittered through and through, and but for Ellador I could well imagine the kind of things he would have said. He only made this circuit at her request, as one who said: "Oh, well-an hour or two more or less-it's over, anyhow!". . .

He's a brash American adventurer; she's an independent, albeit sheltered, sociologist from Herland, a 2000-year-old, all-female society. Not surprisingly, when Vandyck (Van) and Ellador marry, most everything becomes a point of negotiation, if not contention: sexual relations, family obligations and attitudes about race, class, and the welfare state....the book is a window into the second decade of the 20th century...many of Gilman's observations are prescient and astute.  (Publishers Weekly)

This is a significant book. A sequel to Gilman's feminist classic, Herland (1916), this continues yet radically changes that book's utopian vision....More sociological tract than novel, the book analyzes social, economic, and political problems, discussing overpopulation, gender roles, environmentalism, the care of children, and racism--issues that are surprisingly relevant today. The final pages of the book provide an unexpected twist that completes the reader's understanding of Gilman's overall purpose...  (Library Journal)

Gilman's sequel to Herland continues to advance her social theories. However, 'With Her in Ourland' (first published in 1916) is a dystopian work; it chronicles the experiences of characters Van and Ellador, following their departure from Herland as they travel the world during the Great War. As she does in much of her fiction, Gilman urges radical social reform as a way to save the world from chaos and destruction.... (Choice)

Charlotte Perkins Gilman (July 3, 1860 – August 17, 1935) was a prominent American sociologist, novelist, writer of short stories, poetry, and non fiction, and a lecturer for social reform. She was a utopian feminist during a time when her accomplishments were exceptional for women, and she served as a role model for future generations of feminists because of her unorthodox concepts and lifestyle. Her best remembered work today is her semi-autobiographical short story, "The Yellow Wallpaper", which she wrote after a severe bout of post-partum depression.

Book Description Lulu.com, 2017. Condition: New. Klappentext1916 Dystopian Science FictionTHE three of us, all with set faces of high determination, sat close in the big biplane as we said goodbye to Herland a. Seller Inventory # 447532797