Items related to Dying for Victorian Medicine: English Anatomy and its...

Dying for Victorian Medicine: English Anatomy and its Trade in the Dead Poor, c.1834 - 1929 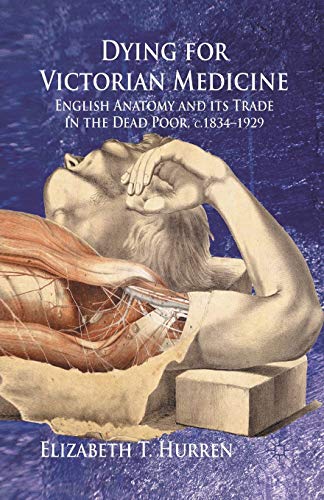 The first book to provide a detailed analysis of the body-trafficking networks of the dead poor that underpinned the expansion of medical education from Victorian times. With an even-handed approach to the business of anatomy, Hurren uses remarkable case histories which still echo a vibrant body-business on the internet today in a biomedical age.

"The first book to provide a detailed analysis of the body-trafficking networks of the dead poor that underpinned the expansion of medical education from Victorian times. With an even-handed approach to the business of anatomy, Hurren uses remarkable case histories which still echo a vibrant body-business on the internet today in a biomedical age." - goodreads.com

"Dying for Victorian Medicine is a valuable contribution to the social-humanist and economic history of death and dissection. Informed by, and in many ways a sequel to, Ruth Richardson's Death, Dissection, and the Destitute (2000), Her study is as tantalizing for its sensitive restoration of the poor souls who ended up on dissectors' slabs (a staggering 125,000 in all, she estimates [p. 303]) as for the detective work involved in order to arrive at its facts and figures... Dying for Victorian Medicine marks the most detailed scholarly dissection to date of one particular set of traffics in dead bodies, as well as perhaps the most eloquent literary effort to capture the lives of the dissected (from the vantage of the slab looking up, not upon)." - Professor Roger Cooter, American Historical Review

"This book demonstrates that Ruth Richardson's Death, Dissection and the Destitute is not the last word on the Anatomy Act (1832).The trade in bodies clearly thrived throughout the Victorian period and into the 20th century. Hurren explores the practical workings of the system and the dispersed historical fragments into what at times seems like a detective story, with undertakers and traders reappearing in a vast network of opportunist body suppliers'." Dr Jonathan Reinharz, Social History of Medicine

"Hurren takes up where Richardson left off to explore the demography, geography, culture, finance and socioeconomic dimensions of dissection. She successfully combines elements of the storyteller with penetrating historical insights to chart the growing complexities of the trade in cadavers after 1832. The result is a groundbreaking and exciting study of the dissected as 'matter out of place' that never loses sight of the poor or of the fear and impact of dissection...this is one of the best books in the social history of medicine that I have read in the last five years (and perhaps longer)." - Keir Waddington, Cardiff University, UK

"Hurren weaves together stories of paupers across England with hard data on the fluctuating numbers of medical students, workhouse inmates, and bodies supplied to anatomy departments; poor law union incomes and pauper burial costs; as well as distances that the bodies travelled along newly built railway tracks - The most illuminating part of Hurren's book is her skillful mapping of the fluctuations in body supply...this is a wonderful contribution to the study of poverty and medicine." - Dr Tatjana Buklijas, Bulletin of the History of Medicine

"Hurren's writing style makes for an easy and fascinating read Hurren more than supports her work with empirical data covering the scale of the anatomy trade... However, it is in her quest to humanize the dead poor, the raw materials of the anatomists that this book really excels. This book is an outstanding piece of work concerning the conditions of the Victorian poor and the impact that the anatomy trade had on them.'"- Al Charlton, Local Population Studies

ELIZABETH T. HURRENReader in the History of Medicine at Oxford Brookes University, UK. She is a leading expert on the history of anatomy and the body, poverty and welfare.