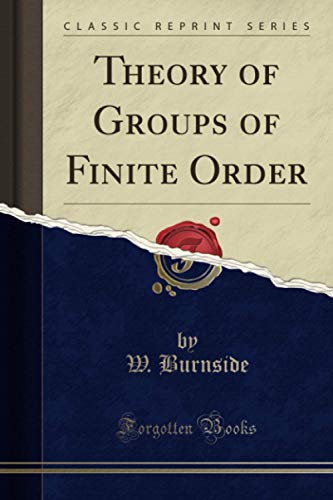 Excerpt from Theory of Groups of Finite Order The theory of groups of finite order may be said to date from the time of Cauchy. To him are due the first attempts at classification with a view to forming a theory from a number of isolated facts. Galois introduced into the theory the exceedingly important idea of a self-conjugate sub-group, and the corresponding division of groups into simple and composite. Moreover, by shewing that to every equation of finite degree there corresponds a group of finite order on which all the properties of the equation depend, Galois indicated how far reaching the applications of the theory might be, and thereby contributed greatly, if indirectly, to its subsequent developement. Many additions were made, mainly by French mathematicians, during the middle part of the century. The first connected exposition of the theory was given in the third edition of M. Serret's "Cours d'Algebre Superieure," which was published in 1866. This was followed in 1870 by M. Jordan's "Traite des substitutions et des equations algebriques." The greater part of M. Jordan's treatise is devoted to a developement of the ideas of Galois and to their application to the theory of equations. No considerable progress in the theory, as apart from its applications, was made till the appearance in 1872 of Herr Sylow's memoir "Theoremes sur les groupes de substitutions" in the fifth volume of the Mathematische Annalen. Since the date of this memoir, but more especially in recent years, the theory has advanced continuously. About the Publisher Forgotten Books publishes hundreds of thousands of rare and classic books. Find more at www.forgottenbooks.com This book is a reproduction of an important historical work. Forgotten Books uses state-of-the-art technology to digitally reconstruct the work, preserving the original format whilst repairing imperfections present in the aged copy. In rare cases, an imperfection in the original, such as a blemish or missing page, may be re

William Burnside (1852–1927) was one of the founders of the modern theory of finite groups. This book, originally published in 1897, is reissued here in the updated second edition of 1911. It includes an account of the character theory of Ferdinand Georg Frobenius (1849–1917), which influenced Burnside's research.

British mathematician William Burnside (1852–1927) studied at Cambridge University and was later appointed Professor of Mathematics at the Royal Naval College in Greenwich, UK, where he spent his career. Burnside published more than 150 papers on mathematical topics. Cambridge University Press published the first edition of his classic book, Theory of Groups of Finite Order, in 1897 and in an expanded second edition in 1911. For the next 40-plus years, this book was the classic introduction to group theory, a worthy ancestor of Marshall Hall's The Theory of Groups, first published in 1959 and also now reprinted by Dover.