Items related to The Diseases and Pests of the Rubber Tree (Classic...

Petch, T. The Diseases and Pests of the Rubber Tree (Classic Reprint)

The Diseases and Pests of the Rubber Tree (Classic Reprint) 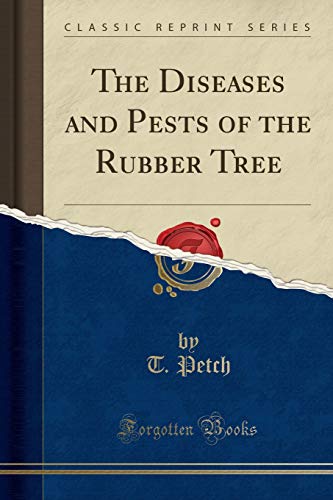 Excerpt from The Diseases and Pests of the Rubber Tree In 1911 the diseases which were known to attack the rubber tree were described in The Physiology and Diseases of Hevea brasiliensis. The number of recorded diseases was then comparatively small, and it was possible to include with them a general account of the structure and physiology of the tree, and a summary of those tapping experiments which promised to afford a foundation for a theory of rubber tapping. That book has now been out of print for some time, and several inquirers have suggested the issue of a second edition. But the number of known diseases of Hevea has, unfortunately, been considerably extended during the last eight years, while the work of numerous investigators in this field has added largely to our knowledge of both old and new ones. Consequently, rubber diseases now demand a volume to themselves; and it has therefore been decided to divide the subject-matter of the former book, and to publish a separate account, revised and brought up to date, of the diseases and pests only. It is hoped that it will be possible, at some future date, to deal similarly with the other half of the original volume. As the book is intended primarily for the rubber planter, technical botanical details have been avoided as much as possible. It is not practicable to exclude them altogether, nor, indeed, is that necessary, for rubber cultivation has made the planter familiar with technical botanical terms to a degree hitherto unknown in tropical agriculture. About the Publisher Forgotten Books publishes hundreds of thousands of rare and classic books. Find more at www.forgottenbooks.com This book is a reproduction of an important historical work. Forgotten Books uses state-of-the-art technology to digitally reconstruct the work, preserving the original format whilst repairing imperfections present in the aged copy. In rare cases, an imperfection in the original, such as a blemish or missing page, may be replicated in