Items related to Gleanings From French Gardens: Comprising an Account...

Robinson, W. Gleanings From French Gardens: Comprising an Account of Such Features of French Horticulture as Are Most Worthy of Adoption in British Gardens (Classic Reprint)

Gleanings From French Gardens: Comprising an Account of Such Features of French Horticulture as Are Most Worthy of Adoption in British Gardens (Classic Reprint) 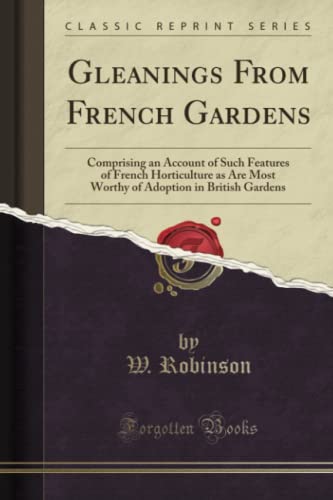 Excerpt from Gleanings From French Gardens: Comprising an Account of Such Features of French Horticulture as Are Most Worthy of Adoption in British Gardens Some of the matters treated of in this book have lately been the subjects of much discussion in the Times as well as in all the horticultural papers; and to give the public a fuller idea of them than could be gleaned from any or all of the journals in which they were described or discussed, is my excuse for writing a work which is so exceptional in its nature. I went to France in January, 1867, with a view to study the horticulture of the country so far as possible, while continuing my connexion with the horticultural press; and in the course of the season I noticed in the Times, the Field, and the Gardener's Chronicle such of the features of French gardening as seemed to me worthy of adoption in this country. In the correspondence which resulted from this, each journal discussed a single phase of the subject or approached it from its own point of view; and the want of illustrations prevented me from explaining in the most effective way several real improvements in our gardens, thus it was difficult for the public to get more than a vague notion of some of the matters of greatest interest in French gardening. After the close of the discussion in the horticultural journals, it occurred to me that a book, with illustrations, would put the more important points in a clearer light; and the result is the publication of the present volume. About the Publisher Forgotten Books publishes hundreds of thousands of rare and classic books. Find more at www.forgottenbooks.com This book is a reproduction of an important historical work. Forgotten Books uses state-of-the-art technology to digitally reconstruct the work, preserving the original format whilst repairing imperfections present in the aged copy. In rare cases, an imperfection in the original, such as a blemish or missing page, may be replicated in our edition. We do,