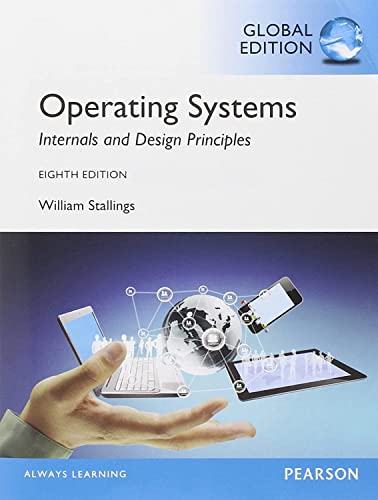 Intended for use in a one- or two-semester undergraduate course in operating systems for computer science, computer engineering, and electrical engineering majors

Operating Systems: Internals and Design Principles provides a comprehensive and unified introduction to operating systems topics. Stallings emphasizes both design issues and fundamental principles in contemporary systems and gives readers a solid understanding of the key structures and mechanisms of operating systems. He discusses design trade-offs and the practical decisions affecting design, performance and security. The book illustrates and reinforces design concepts and ties them to real-world design choices through the use of case studies in Linux, UNIX, Android, and Windows 8.

This program presents a better teaching and learning experience–for you and your students. It will help:

William Stallings has made a unique contribution to understanding the broad sweep of technical developments in computer networking and computer architecture. He has authored 17 titles, and counting revised editions, a total of 41 books on various aspects of these subjects. In over 20 years in the field, he has been a technical contributor, technical manager, and an executive with several high-technology firms. Currently he is an independent consultant whose clients have included computer and networking manufacturers and customers, software development firms, and leading-edge government research institutions.

He has received the award for the best Computer Science textbook of the year ¿seven times from the Text and Academic Authors Association.

Bill has designed and implemented both TCP/IP-based and OSI-based protocol suites on a variety of computers and operating systems, ranging from microcomputers to mainframes. As a consultant, he has advised government agencies, computer and software vendors, and major users on the design, selection, and use of networking software and products.

As evidence of his commitment to providing a broad range of support to students, Bill created and maintains the Computer Science Student Resource Site at WilliamStallings.com/StudentSupport.html. This site provides documents and links on a variety of subjects of general interest to computer science students (and professionals).

He is a member of the editorial board of Cryptologia, a scholarly journal devoted to all aspects of cryptology. He is a frequent lecturer and author of numerous technical papers. His books include Data and Computer Communications, Ninth Edition (Prentice Hall, 2011), which has become the standard in the field.

Dr. Stallings holds a PhD from M.I.T. in Computer Science and a B.S. from Notre Dame in electrical engineering.