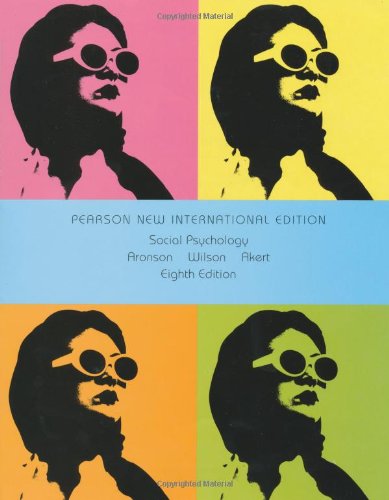 Research made relevant through a storytelling approach.

This renowned text maintains its acclaimed storytelling approach, teaching the science of psychology through an engaging narrative that makes research relevant to students. Drawing upon their extensive experience as researchers and teachers, Elliot Aronson, Tim Wilson, and Robin Akert present the classic research that has driven the field and introduce cutting-edge research that is the future of social psychology. Significantly updated to reflect advances in the discipline, the 8th edition provides a firm foundation for students to build their understanding of this rigorous science in a way that engages and fascinates.

A better teaching and learning experience

This program will provide a better teaching and learning experience– for you and your students. Here’s how:

Elliot Aronson is one of the most renowned social psychologists in the world. In 2002 he was chosen as one of the 100 most eminent psychologists of the twentieth century. He is currently Professor Emeritus at the University of California at Santa Cruz and Distinguished Visiting Professor at Stanford University.

Dr. Aronson is the only person in the 110-year history of the American Psychological Association to have received all three of its major awards: for distinguished writing, distinguished teaching, and distinguished research. Many other professional societies have honored his research and teaching as well. These include: the American Association for the Advancement of Science, which gave him its highest honor, the Distinguished Scientific Research award; the American Council for the Advancement and Support of Education, which named him Professor of the Year of 1989; the Society for the Psychological Study of Social Issues, which awarded him the Gordon Allport prize for his contributions to the reduction of prejudice among racial and ethnic groups. In 1992, he was named a Fellow of the American Academy of Arts and Sciences. He has served as President of the Western Psychological Association as well as President of the Society of Personality and Social Psychology.

Tim Wilson did his undergraduate work at Williams College and Hampshire College and received his Ph.D. from the University of Michigan. Currently Sherrell J. Aston Professor of Psychology at the University of Virginia, he has published numerous articles in the areas of introspection, attitude change, self-knowledge, and affective forecasting, as well as the recent book, Strangers to Ourselves: Discovering the Adaptive Unconscious. His research has received the support of the National Science Foundation and the National Institute for Mental Health. He has been associate editor of the Journal of Personality and Social Psychology and a member of the Social and Groups Processes Review Committee at the National Institute of Mental Health. He has been elected twice to the Executive Board of the Society for Experimental Social Psychology and is a Fellow in the American Psychological Society. Wilson has taught the Introduction to Social Psychology course at the University of Virginia for more than twenty years. He was recently awarded an All University Outstanding Teaching Award.

Book Description Pearson, 2013. Paperback. Condition: Good. Good condition is defined as: a copy that has been read but remains in clean condition. All of the pages are intact and the cover is intact and the spine may show signs of wear. The book may have minor markings which are not specifically mentioned. Most items will be dispatched the same or the next working day. Seller Inventory # wbb0013548615

Book Description Paperback. Condition: Very Good. The book has been read, but is in excellent condition. Pages are intact and not marred by notes or highlighting. The spine remains undamaged. Seller Inventory # GOR006750154