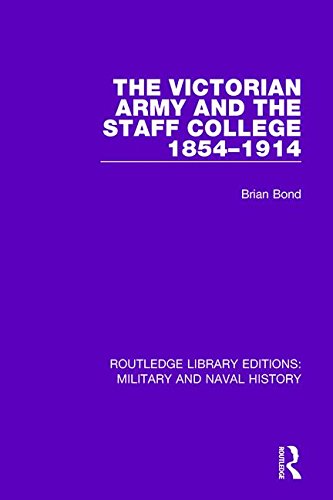 A pioneering work in British military history, originally published in 1972, this book is both scholarly and entertaining. Although the book concentrates on a single institution, it illuminates a much wider area of social and intellectual change. For the Army the importance of the change was enormous: in 1854 there was neither a Staff College nor a General Staff, and professional education and training were largely despised by the officers: by 1914 the College could justly be described as ‘a school of thought’ while the officers it had trained were coming to dominate the highest posts in Commands and on the General Staff.

Brian Bond is Emeritus Professor of Military History at King's College London, where he has played a leading role in the development of military history in the Department of War Studies from 1966 to 2001. He was president of the British Commission for Military History from 1986 to 2006. He has published numerous books including The Unquiet Western Front (2002) and Survivors of a Kind: Memoirs of the Western Front (2008).