Items related to The Journals and Letters of Susan Burney: Music and...

Olleson, Philip The Journals and Letters of Susan Burney: Music and Society in Late Eighteenth-Century England

The Journals and Letters of Susan Burney: Music and Society in Late Eighteenth-Century England 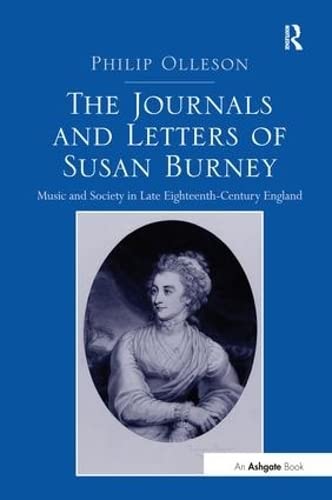 Susan Burney (1755-1800) was the third daughter of the music historian Charles Burney and the younger sister of the novelist Frances (Fanny) Burney. She grew up in London, where she was able to observe at close quarters the musical life of the capital and to meet the many musicians, men of letters, and artists who visited the family home. After her marriage in 1782 to Molesworth Phillips, a Royal Marines officer who served with Captain Cook on his last voyage, she lived in Surrey and later in rural Ireland. Burney was a knowledgeable enthusiast for music, and particularly for opera, with discriminating tastes and the ability to capture vividly musical life and the personalities involved in it. Her extensive journals and letters, a selection from which is presented here, provide a striking portrait of social, domestic and cultural life in London, the Home Counties and in Ireland in the late eighteenth century. They are of the greatest importance and interest to music and theatre historians, and also contain much that will be of significance and interest for Burney scholars, social historians of England and Ireland, women's historians and historians of the family.

'Susan Burney's wonderfully vivid picture of social and musical life in London and the Home Counties during the 1780s comes in a hitherto unpublished series of letter-journals. The jewel in the crown for music historians is her amazing record of a year in the life of the Italian opera company at the King's Theatre. We are transported back into its world of gossip and adulation as leading castrati mingled with their aristocratic backers. Her extended set-piece descriptions are full of richly perceptive observations about music and the way it was performed.' Ian Woodfield, Queen's University Belfast, UK 'The edition, produced to a high standard by Ashgate, makes a substantial contribution to the scholarly literature on the Burneys. Besides the journal entries that form the main contents, among the many strengths of the volume are a variety of helpful and informative items supplementing the main text... The most substantial of these is Olleson's biographical introduction... altogether so thoughtfully conceived and enjoyable to read, that it does ample justice to Susan Burney's writings. It is surely destined to serve as an important reference source in its field'. Eighteenth-Century Music 'Recommended.' Choice '[A]n excellent production in every way and essential reading for anyone interested in music and society in the late eighteenth century England.' Early Music Review 'The long-awaited publication of this significant collection does not disappoint... The value of the source is beyond doubt. No other diarist has given so frank, detailed and spontaneous a record of a particularly interesting moment in time in the London music scene... Historians are greatly in debt to Olleson. The book does full justice to its fascinating subject matter, and it is a pleasure to read...' The Musical Times 'A volume of fine craftsmanship... As editor, Philip Olleson never fails to attend to the people, places, events, and music in Susan's journals. Annotations provide astonishing detail, while impressive cross referencing directs readers to relevant scholarship.' Notes '... it is good to report that Philip Olleson's elegant and informative edition serves [Susan Burney] well... Susan's journal-letters will be invaluable to historians of music and many other subjects.' Early Music Performer '... Philip Olleson's volume incorporates an unprecedentedly large proportion of the extant letters and journal entries written between 1779 and Susan [Burney's] death in 1800. Most of these, addressed to [her sister] Fanny, were written when the sisters were apart from one another, in 1779-80, 1786-91 and 1795-9. Olleson fills the gaps with a comprehensive biography, including an account of [her father] Charles's career and information about many members of the large Burney family... Olleson's editing is commendably punctilious... Perhaps [the book's] most valuable contribution is the portrait it paints of Susan herself: she emerges as exuberant in her approach to intellectual pursuits, perspicacious in her interaction with an array of amateur and professional musicians, compassionate and discreet in her personal relations. The material post-dating Susan's removal to Ireland, enforced by an increasingly absent and dissolute husband and triggering her early death from consumption, makes poignant reading. Olleson's commitment to this challenging task means that many ... will be enriched by their 'meetings' with Susan Burney'. Journal for Eighteenth-Century Studies ' ... this present selection of extracts presents much material that has not been published before, and breaks new ground ... The book is well written and meticulously edited. The reference notes are concise, and conveniently presented as footnotes rather than endnotes, making them easy for the reader to use. There is a bibliography, and an index, within which Olleson helpfully provides dates for, and a short description of, the people listed there, saving the reader the trouble of searching for that information elsewhere. All in all, this excellent book will provide a valuable addition to the libraries of musicians and cultural historians who are interested in the artistic and social life of late 18th-century England'. The Consort 'The journals and letters of another musically astute Burney daughter, Susan (1755-1800), have now also been brought to light, thanks to the extensive archival and editorial work of Philip Olleson ... compelling, faithfully transcribed texts are supplemented by Olleson's extensive editorial footnotes. Concerning Susan's discussions of music, Olleson (in most cases) identifies the musical selections, performers, performances, and listeners to which Susan alludes, revealing his edition to be a tour de force of detective work. Another great strength of Olleson's editing is the ongoing dialogue he fosters between Susan's writing and that of her father and sister ... For musicologists, Olleson's edition of Susan's letters and journals contributes a fresh insider's perspective on musical life ... But Olleson's edition will undoubtedly have a wider audience than musicologists... As literature and historical record, Susan's writings will rightfully showcase the importance of music within this Georgian world to a larger, interdisciplinary readership'. NABMSA Newsletter 'Susan Burney emerges from the pages of her journals as a wonderful character, intelligent, humorous, warm and highly perceptive, and to read her journals is to be drawn into her world. Olleson's affection for his subject is obvious and in the acknowledgements section he describes Susan as having "almost become an additional member of [his] family."' Fontes Artis Musicae 'Great credit for this belated recognition must go to music historian Philip Olleson for his epic labor of cultural recovery. ... Much of this material will be new even to music historians, although perhaps the greatest value of the volume will be to literary critics and historians of the late eighteenth century seeking a window onto the glamorous ephemera of the Georgian music industry.' 1650-1850

Philip Olleson is Emeritus Professor of Historical Musicology in the Department of Music at the University of Nottingham, UK. He has written extensively on the social history of music in England in the late eighteenth and early nineteenth centuries. Among his previous publications are The Letters of Samuel Wesley: Professional and Social Correspondence, 1797-1837 (2001), Samuel Wesley (1766-1837): A Source Book (2001) (with Michael Kassler), and Samuel Wesley: The Man and his Music (2003).

1. The Journals and Letters of Susan Burney

2. The Journals and Letters of Susan Burney: Music and Society in Late Eighteenth-Century England

3. The Journals and Letters of Susan Burney: Music and Society in Late Eighteenth-Century England

4. The Journals and Letters of Susan Burney

5. The Journals and Letters of Susan Burney: Music and Society in Late Eighteenth-Century England

6. The Journals and Letters of Susan Burney: Music and Society in Late Eighteenth-century England