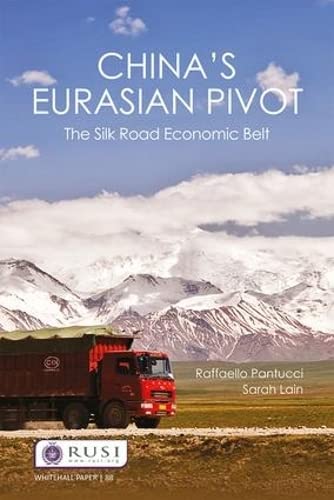 Based on a two-year research project that included travel and workshops in South and Central Asia, this Paper examines Beijing’s changing impact and relationship with its near neighbourhood. Conceived prior to the announcement of Xi Jinping’s ‘Belt and Road Initiative’ research for this report was undertaken in the shadow of the September 2013 announcement and the ‘Belt and Road’ ultimately proved to be the driving framework under which this report was drafted. The report sketches out the roots of the initiative, and how it is being felt on the ground, exploring in detail how it is being received in China’s immediate neighbourhood where its impact is most significant for China.

Raffaello Pantucci is Director of International Security Studies at the Royal United Services Institute (RUSI). Prior to working at RUSI he spent almost four years in China as a Visiting Scholar at the Shanghai Academy of Social Sciences. His work has focused on China’s relations over its western borders, as well as counter-terrorism questions. He is the co-creator of the site http://www.chinaincentralasia.com which is a repository of research and writing on China’s relations in Eurasia. His work has been published in media outlets like the New York Times, Financial Times, Wall Street Journal, Times, Guardian, and more, while his academic research has been published in outlets like RUSI Journal, Survival, Studies in Conflict and Terrorism and the National Interest. He is the author of We Love Death As You Love Life: Britain's Suburban Terrorists (London: 2015/US forthcoming.

Sarah Lain researches the post-Soviet space, in particular Russia’s foreign policy and regional dynamics in Central Asia. In 2016, she acted as specialist advisor to the UK’s Foreign Affairs Committee on their inquiry into Russia-UK relations. Aside from foreign policy, she has a special interest in financial crime. Prior to joining RUSI, Sarah worked at KPMG and Control Risks, conducting due diligence investigations into companies operating in post-Soviet countries, with a focus on bribery, corruption, fraud and money laundering. Her work has been published in academic journals and media outlets.