Items related to Modern Money Theory: A Primer on Macroeconomics for... 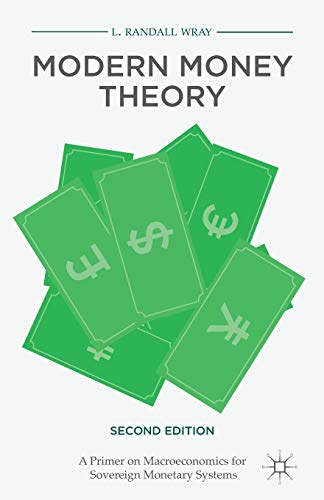 In a completely revised and updated second edition, Randall Wray takes a new approach to macroeconomics that challenges conventional wisdom and uncovers how money 'works' in the modern economy. This book synthesizes the key principles of Modern Money Theory, exploring macro accounting, monetary and fiscal policy, currency regimes and exchange rates in developed and developing nations. Randall Wray addresses the pressing issue of how misunderstandings about the nature of money have caused the current global financial meltdown, and provides fresh ideas about how policymakers around the world should address the continued weaknesses in their economies. With new chapters on tax policies and inflation, this second edition reasserts the importance of the Modern Money Theory approach and how Wray has changed the way we look at the economy.

'This book paves the way for another revolution in macroeconomics. Wray shows us how an economy with modern money works and, more importantly, how it can be used to lift us to a more prosperous tomorrow.' Stephanie Kelton, University of Missouri-Kansas City

'Wray debunks so many of the destructive beliefs that have contributed to our current economic and social malaise. This is a primer that should not only become mandatory reading for students of economics, but any policy maker who truly wants to deal with the grave disasters engendered from years of 'reading from the wrong playbook'.' Marshall Auerback, Director of the Economists for Peace and Security (epsusa.org) and a research associate at the Levy Institute

L. Randall Wray is a professor of Economics at the University of Missouri-Kansas City, USA, and Senior Scholar at the Levy Economics Institute of Bard College, New York, USA. A student of Hyman P. Minsky while at Washington University in St. Louis, Wray has focused on monetary theory and policy, macroeconomics, financial instability, and employment policy. He has published widely in journals and is the author of Why Minsky Matters (2015), Understanding Modern Money: The Key to Full Employment and Price Stability (1998) and Money and Credit in Capitalist Economies (1990). He is the editor of Credit and State Theories of Money (2004) and the co-editor of Contemporary Post Keynesian Analysis (2005), Money, Financial Instability and Stabilization Policy (2006), and Keynes for the Twenty-First Century: The Continuing Relevance of The General Theory (2008). Wray is also the author of numerous scholarly articles in edited books and academic journals. He is the co-editor of the Journal of Post Keynesian Economics. He has been a visiting professor at the University of Rome, the University of Paris, the University of Bergamo, the University of Bologna, and UNAM (Mexico City). He was the Bernardin-Haskell Professor, UMKC, Fall 1996, and joined the UMKC faculty as Professor of Economics, August 1999.