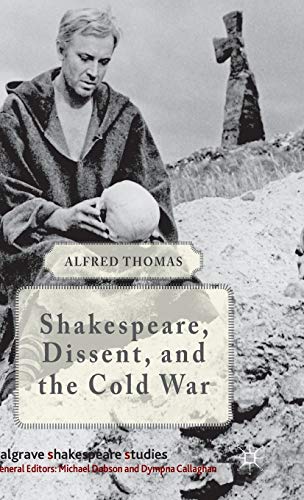 Shakespeare, Dissent and the Cold War is the first book to read Shakespeare's drama through the lens of Cold War politics. Rather than simply exploring how Shakespeare's plays were appropriated for political purposes in Communist Central and Eastern Europe, the book uses the Cold War experience of dissenting artists in theatre and film to highlight the coded religio-political subtexts in Hamlet, King Lear, Macbeth and The Winter's Tale.
Combining close readings of these plays with their adaptations by dissenting artists in the twentieth century, the study reveals the deep ideological struggles within Shakespeare's drama and within the playwright himself during a period of state oppression and religious violence.

"Thomas has written a lively, intelligent, and interesting study of the politics of Shakespearean drama and its relationship to the literature and theater of Cold-War (and post-Cold-War) Europe. He examines Shakespeare's deliberate employment of religio-political codes that call attention to the persecution of English Catholics, the repressive practices of the English government and the socially disruptive effects of religious antagonisms. In analyzing Russian film versions of Hamlet and King Lear as indirect criticisms of the Soviet system, the Czech-English playwright Tom Stoppard's Cahoot's Macbeth in the context of post-1968 Czech political resistance, and Ingeborg Bachmann's poem 'Bohemia Lies on the Sea,' Thomas highlights the political potential of Shakespearean drama that can be translated into powerful political protest and analysis in changed (modern) circumstances." - Arthur Marotti, Wayne State University, USA

Alfred Thomas is Professor of English at the University of Illinois at Chicago, having previously taught at Rutgers, Harvard and Berkeley, USA. He is the author of seven books, including A Blessed Shore: England and Bohemia from Chaucer to Shakespeare (2007) and Prague Palimpsest: Writing, Memory, and the City (2010).

1. Shakespeare, Dissent and the Cold War

4. Shakespeare, Dissent, and the Cold War

5. Shakespeare, Dissent, and the Cold War

6. Shakespeare, Dissent, and the Cold War

8. Shakespeare, Dissent, and the Cold War